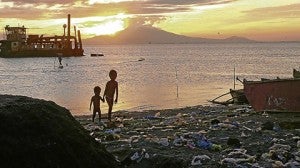 PULO, “an island of garbage off Navotas,” is now only a memory. But its images are preserved in “Pintakasi.” Courtesy of Giselle Sanchez

Marcos, who started work on the film as producer over three years ago, feels that this dream project becoming a reality is significant: “Our country is famous for exporting and outsourcing animating talents. They have been working for top studios abroad but, until now, we cannot call any cartoon character or franchise our own.”

With “Pintakasi,” she aims to showcase Filipino talent in both live action and animation. “We even got the award-winning hip-hop dance group Philippine All-Stars to perform in the film,” says Marcos.

An entry in the indie section of the Metro Manila Film Festival, “Pintakasi” has cinematographer Lee Meily as live-action director and teacher-artist Nelson Caguila as animation director. Caguila, according to Meily, tapped students from St. Benilde, St. Scholastica’s and Asia Pacific College to help, along with out-of-school youths as trainees.

“Pintakasi,” Marcos clarifies, is a play on words. “It can refer to cockfights, but it can also be about painting.”

Main protagonist DJ, a street artist, is a modern personification of Filipino heroes.

“Since it’s mixed media, we had to spend a lot of time on it,” Marcos relates. “In Pixar, the average time spent on a project is five and a half years. Our three years isn’t so bad.”

A lot transpired in those three years. Actress Giselle Sanchez, who was pregnant at the time of shoot, notes, “Now, that baby, Xavier Zappa, is 2 years old.”

Sanchez remembers being seven months pregnant and walking five kilometers to Pulo, “an island of garbage off Navotas.” 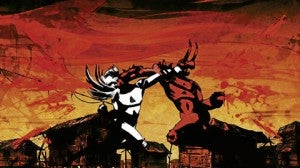 She recalls that Marcos held her ground in spite of the challenges. “Every time we went to our location in Isla Pulo, she would be greeted by problems that the community would ask her to solve.”

Isla Pulo no longer exists, Meily points out. “It was wiped away by Typhoon ‘Ondoy,’” Sanchez elaborates. “But memories of Pulo are preserved in ‘Pintakasi.’”

The past three years seemed to lead actor John Wayne Sace like a roller-coaster ride. But he’s fine now. “I learned a lot while doing this film—about life in the streets, about dealing with people.” He also became a father. “My son is 2 years old; I named him DJ, after my character in the film.”

In a way, ABS-CBN stars JM de Guzman and Erich Gonzales first got their big breaks via this film, too. De Guzman has since shed baby fat and become matinee-idol material, and Gonzales blossomed into one of the Kapamilya network’s “It” girls.

Now that they are mainstream stars, Marcos hopes their popularity will give “Pintakasi” a boost during its indie film fest run, which started at Robinsons Galleria on Sunday and which ends December 21.