When Christoph Waltz is in a good mood, humorous sparks fly 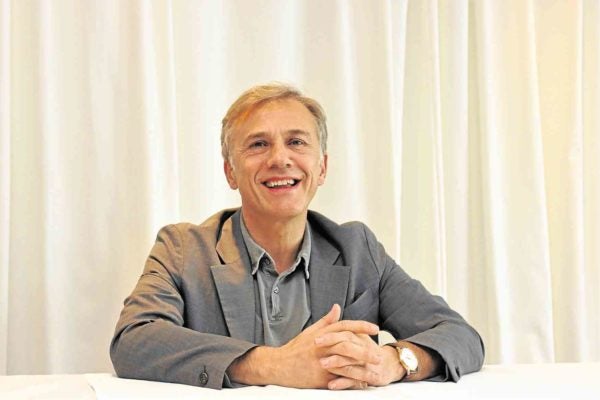 LOS ANGELES—When Christoph Waltz shows up beaming and waving like a presidential candidate, you’re in for a treat. That was how he strode into a room at the SLS Hotel one afternoon. He sat down and his barrage of droll, politically incorrect cracks—a welcome change in these politically correct times—came one after another.

Like all of us, mortals—the two-time Oscar and Golden Globe winner has moods. He can be taciturn and grimly serious. But, in this recent interview, the Vienna-born actor who has a German father and an Austrian mother brimmed with humor and charm. So keep in mind that his quips quoted below dripped with tongue-in-cheek hilarity.

One of the best actors around, Christoph shines again in Alexander Payne’s “Downsizing,” a dramedy that imagines a world where scientists discover a solution to overpopulation and dwindling natural resources. The humans have the option to be shrunk to five inches tall, so they consume far less of the world’s natural resources. Christoph plays an aging party-boy neighbor of Matt Damon in this miniature world.

Christoph finished filming his feature directing debut, “Georgetown,” a crime drama in which he also acts alongside Annette Bening and Vanessa Redgrave. The 61-year-old also directs operas, so helming a movie is a natural progression for him.

Excerpts from our chat, which you must read in playful context:

What’s the biggest misconception about you? That I’m a nice person.

And that you’re German. Yeah, that’s another misconception. My father was German, so I do have a German passport.  That’s as German as I get.

How would you describe yourself then? As a very boring, not a specifically nice, company. And someone who always tells the truth, which makes it so uncomfortable for everybody.

Why do you have such a bad opinion of yourself? I don’t know.  Maybe there is some not necessarily Austrian, but Viennese, method in that. We don’t address things directly. That’s why Germans consider us slimy.

One of the greatest Austrian writers ever, Karl Kraus, said a true Viennese is chiseled from slime.

How about saying one or two good things about you? I’m very beautiful and profoundly educated.

And charming. No, I wouldn’t say that.

You have been to Norway, right? (To shoot parts of “Downsizing” there.) What do you think of Scandinavians now that you’ve talked badly about Germans? I could have.  Well, they do the better goose step in North Korea. In the Soviet Union, they did a goose step that was impeccable, I tell you.

There’s a line in “Downsizing” that goes something like, “Friends always tell friends the truth.” In your own life, what were some of the truths that you had to tell friends or your friends had to tell you? You really think I’ll disclose that willingly? The other day, I spoke to an actor who worked with (Jean-Luc) Godard, who apparently says to actors, oh, you’re so bad. So, you try to avoid a conversation like that.

But once in a while, someone feels compelled to tell you what he or she considers the truth. Then, you have to take it.

Was this someone a person you worked with? Not with that specific person, no, but dealing with other people, yeah.  You get told, especially if you work in the theater. In Germany, there seems to be a culture of brutal truth-telling.

Can you talk about the relevance of “Downsizing,” especially in lessening our impact on the environment? Everything about it is relevant. But, there’s another layer, and that’s the one I was interested in.  Downsizing—physically—will solve a lot of problems, [but] it will also create a lot of problems that we don’t know.

It’s a metaphor for what people should do all together in a civilized hubris way. Until the 15th century, people thought we were the center of the universe, then a few discoveries happened that proved otherwise.

Now, we regressed into believing we’re the center of the universe again.

How would you describe Alexander Payne as a storyteller? He attempts and achieves what I consider the best way of telling stories—a profound context in a light form. He makes a comedy out of it. Comedy is the best way to swallow the bitter pills.

Do you have a sense of how Europeans view Trump? Yes, I do.  I have friends who don’t use that name (Trump) anymore.  They call him 45, because it sort of leaves this aftertaste that you can’t get rid of for the rest of the day.

Can you give an update on “Georgetown,” your feature -film directing debut? I’m in the middle of editing.

What was it like to direct? I watched dailies as I went on, but I was so  engrossed. So now, I watched them again. I wrapped three weeks ago. I saw myself play this part, then at the end of a dramatic scene with Vanessa (Redgrave), I said, “Cut.”

It was the weirdest thing to see the actor call the shot,  say “cut,”  talk to the actors and do it again. I thought something has gone awry, and it might have.

What is the subject of the film that made you choose it for your first feature directing job? A friend found this article in the New York Times Magazine and said to me, “This could be a fantastic part for you to play.” I said, “I’m not looking for a fantastic part to play, I’m looking for a fantastic story for me to tell.” She said, “That’s the same thing.” I tried to dodge the double function.   I wanted to direct the movie.

The story in three words is about desperate social climbing. So, I thought it was extremely relevant. It has nothing to do with presidents, but it has something to do with someone who’s delusional and driving himself into grandiosity. But, he has no means to back it up.

Among the directors you worked with, who did you learn from most, directing-wise? That’s very difficult to say because you take what you can get.  There’s one thing that I’m “infected” by, and that’s Roman Polanski’s precision.  [His] precision is enormous. I don’t have enough chutzpah to say, “This is what I want to do.”

Over the course of the years, I’ve worked with so many directors. It’s not only the great directors that you might get inspired by. It might be the lousiest director you’ve ever worked with who inspired you inadvertently.

I’ve worked with a director—I’m afraid you’ve seen the movie where I was baffled about the ignorance on every level. He’s a lovely guy, but he should do something else. We learn more from the bad examples than we learn from the good examples.