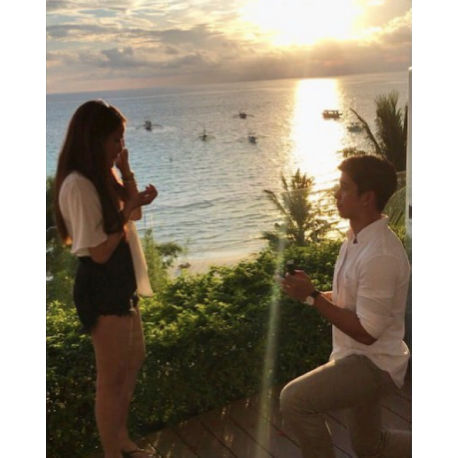 Longtime couple, actors Rodjun Cruz and Dianne Medina, have finally and officially reserved each other for the altar.

The engagement happened in the beautiful island of Boracay. A recent Instagram post by Medina showed her teary as Cruz knelt down before her, with a ring in his hand, as he popped the question.

Cruz, on the other hand, uploaded a photo of them together showing the ring.

Incidentally, Cruz also celebrated his 30th birthday with his family. Taking from the sequence of events, he seemed to have intentionally timed his proposal to his lady love on his special day.

Cruz and Medina are among the very few showbiz couples whose relationship has endured the test of time. They became a couple back in their late teens and had been with each other since.

Their love story started out while they were both under ABS-CBN’s talent arm Star Magic. They were able to work with each other occasionally in some Kapamilya shows. Their blooming love was at first kept a secret, as they did not want their bosses to know about it then. Their love story spans over a decade now.

The PTV4 anchor has said in past interviews that their relationship did not come off smooth as others would think. Some people thought they weren’t going to last, but then, they proved them wrong.

As shown in her social media profiles, Medina is evidently close to the Cruz family, especially to Rodjun’s cousins, actresses and singers Sunshine, Geneva and Donna Cruz. Meanwhile, Medina happens to be the cousin of Miss Universe Philippines 2016 Maxine Medina. JB

Dianne Medina knows Rodjun Cruz is ‘the one’