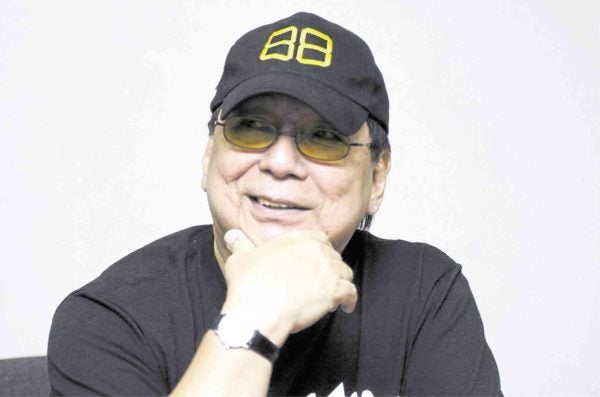 He pleaded guilty as charged.

But sorry is not enough, or so says a coalition of youth groups who watched comedian and TV host Joey de Leon make a fool of himself for his “grossly misinformed” statements on depression in an episode of the noontime show “Eat Bulaga.”

On top of his public apology, the Youth for Mental Heath Coalition (Y4MH) wants De Leon to perform some sort of community service by sitting down with advocates who could help him learn more about the mental health condition affecting 300 million people worldwide.

On Friday, the Y4MH, a group of student organizations working “to elevate Filipinos’ consciousness on mental health,” sent an open invitation to De Leon for an “educational discussion” following the statements he made on depression on the noontime show he cohosts.

“A public acknowledgment of mistake is welcome, but a changed mindset on mental illness would be the best form of apology,” Y4MH national chair Raymond John Naguit said in a statement.

De Leon drew flak on Thursday after he downplayed the effects of depression upon learning that a contestant on the program’s “Juan for All, All for Juan” segment was suffering from the disorder. He dismissed depression as “just made up.”

Cohost Maine Mendoza corrected De Leon and said that depression was no laughing matter and that those suffering from it should be given support.

Instead of correcting himself, De Leon stood his ground and said that these people “should not be supported,” saying they were just acting up.

“These statements are grossly misinformed and present potentially dangerous ideas to the general public. The sad truth is that these same ideas may be shared not uncommonly by people around us—extending the struggle to providing a new perspective to people who view depression through uninformed lenses,” Y4MH said.

It added that there was “nothing hilarious about the suffering” being endured by those with depression, especially that it could sometimes lead one to commit suicide.

According to the World Health Organization (WHO), more than 300 million people suffer from depression, which has become “the leading cause of disability worldwide.”

“At its worst, depression can lead to suicide. Close to 800,000 people die due to suicide every year. Suicide is the second leading cause of death in 15- to 29-year-olds,” WHO said.

Naguit said De Leon’s remarks show the need “to heighten the public’s awareness on mental health and for our fellow youth to participate in the continuous practice of engaging and clarifying mental health concepts in our own communities.”

Health Secretary Paulyn Ubial has also advised the public to be careful in their statements concerning depression that may tend to influence people to ignore one’s mental health.

“This is a democratic country and people can say their own opinion. However, let’s be responsible enough so that we don’t influence people not to practice healthy behavior,” she said on Friday.

De Leon apologized for his remarks on Friday, admitting that he was ill-informed on the effects of depression as a mental illness.

Ubial declined to say if the comedian should be accountable for his statement, noting that he was free to express his opinion.

However, she said the public should be careful about giving remarks that may influence people to ignore the disorder.

“If that happens, they might ignore depression and it might get worse in a certain person. We will not be able to help and address the problem,” Ubial said.

The health secretary reminded the public not to disregard signs and symptoms of depression in themselves or in other people close to them.

“If we have someone at home or at work who says he is depressed, that he is sad because he feels alone, do not ignore them. The first aid for that is talking to them, paying attention to those expressing such sentiments,” Ubial said.

She stressed that the Department of Health’s goal is to prevent depression from escalating into entertaining suicidal thoughts.

“Do not wait for it to worsen until you are feeling really low and nearly committing suicide, then you will seek help. There is a scientific basis for depression, there are interventions and people who can help you,” she said.

Read Next
Learning from their mentors has changed these celebs’ lives—for the better
EDITORS' PICK
The Best Tech Gifts For The 2022 Holidays
House energy committee chair Arroyo bats for cheap electricity
Bongbong Marcos: Oil search in West PH Sea may skip ‘gov’t to gov’t’ talks
The vivo Y16 makes the season of giving more thoughtful for the whole family
Fare card prices soar amid shortage
US has ‘many requests’ on Edca, Bongbong Marcos says
MOST READ
SSS: Pensioners 13th month, year-end benefits to be released first week of December
LOOK: Kris Aquino visited by ‘Kris TV’ sidekick Darla Sauler in US
US has ‘many requests’ on Edca, Bongbong Marcos says
Not just a consultant, military says of slain Red leader
Don't miss out on the latest news and information.