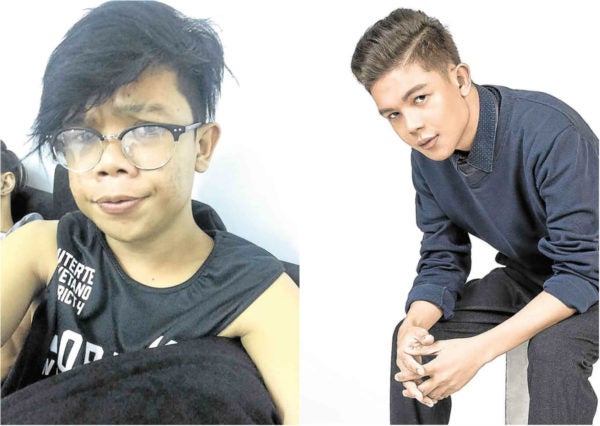 BEFORE AND AFTER Marlou Arizala becomes Xander Ford.

Do you like what you see in the mirror? Until recently, Marlou Arizala certainly didn’t.

The 20-year-old former Hasht5 member and YouTube novelty wanted so much to follow in the footsteps of the movie stars he idolized but, while he had their enthusiasm, drive and lakas ng loob (guts), he didn’t possess swoon-worthy good looks that could launch financially lucrative acting projects and endorsement deals. So, with the help of his enabling pals, he did something about it.

Marlou’s story plays out like “The Ugly Duckling.” In Hans Christian Andersen’s 1843 tale about personal transformation and triumph, a “homely” barnyard duckling suffers abuse from everybody around him until, much to everyone’s surprise, he matures into a beautiful swan.

For the most part, Marlou’s radical transformation from “ugly duckling” to “swan” is attributed to the skill and expertise of board-certified plastic and reconstructive surgeon, Dr. Eric “Doc Yappy” Yapjuanco (of The Icon Clinic), who has enabled the actor-wannabe to “magically” transmogrify into—Xander Ford.

And why not? After all, many of your favorite movie stars habitually go under the knife to “enhance” or “refine” their already-telegenic mugs, albeit with more subtlety, secrecy and “discretion.”

Of course, talent is a different matter altogether, which doesn’t change the fact that Tinseltown has a lot of pleasant faces with not much else to offer—but, that’s another story.

But, Xander’s tale isn’t just about another starlet hoping to get his share of the show biz pie. It’s also about realizing dreams and exceeding expectations—but, at what price?

So, here’s a question for you, dear readers: How radically would you change the way you look to get ahead in life?

In his case, however, Xander sees the extensive makeover as a new lease on life—and an opportunity to go beyond the novelty of Hasht5’s fleeting 15 seconds of fame.

“Sobra po akong na-bash dati, and I wanted something new,” Xander told us when we asked him why he wanted the radical “overhaul.” “Dream ko po kasi talagang sumikat para makatulong sa pamilya ko (I’ve always wanted to be famous, to help my family). I want to go back to acting. Now, hindi na lang online ang platform na magagamit ko, pati na rin TV and movies. I have no regrets.”

Xander didn’t really have anybody in mind when he decided to go under his surgeon’s knife. He clarified in Filipino, “I didn’t have a peg. Initially, I just asked Doc Yappy to fix my nose (via rhinoplasty). But, he also recommended to have my chin ‘augmented.’”

The actual “reconstruction” of his nose and chin took almost five hours to finish, Xander disclosed: “Other than rhinoplasty and chin augmentation, I’m undergoing noninvasive skin treatments, like Fractional Laser and Revlight. Doc Yappy says the best results will be most noticeable within six months to one year.”

But, such extensive reinvention doesn’t come without risks. “It’s quite possible that the outcome won’t match what the patient expects or envisions,” Doc Yappy explained to Inquirer Entertainment. “Complications include scarring and infection, which are treated and managed accordingly.”

The UERMMMC (University of the East-Ramon Magsaysay Memorial Medical Center) alumnus and Makati-Med-trained physician stressed that reconstructive surgery is not for everybody. “It’s best for people with pathologic cases, like a mastectomy patient who wants to have a new set of breasts, or a disfigured car-accident victim with multiple lacerations, avulsed wounds and abrasions. They’re the ideal candidates for such a procedure.”

Doc Yappy added: “First and foremost, the patient must be physically and emotionally fit. Before surgery, he is subjected to preoperative diagnostics and, thereafter, must get a cardio-pulmonary clearance from an internist.

“Also, the patient shouldn’t expect unrealistic results and must be 100-percent decided to undergo the procedure. Most importantly, he should do it for himself and not for anybody else. I refuse patients who aren’t physically fit for surgery, or if the results they desire are not realistic.”

For Xander, however, the results of his much buzzed-about reinvention are as real as they get, and he’s loving every minute of the newfound interest he’s generating. Moreover, he’s only too happy to seize every opportunity he can squeeze out of it—until his next 15 seconds of fame runs out again.

If nothing comes out of his career-boosting “vanishing act,” would Xander go through more face-enhancing procedures and change his name again? This time, the person formerly known as Marlou isn’t too sure with his answer: “I’ll have to think about that. For now, though, I’m happy and contented about the way I look.”