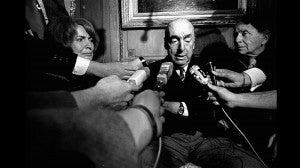 This Oct. 21, 1971 file photo shows Pablo Neruda, poet and then Chilean ambassador to France, talk with reporters in Paris after being named the 1971 Nobel Prize for Literature. Chile's Communist Party wants a formal investigation into the death of the country's revered poet, who officially died of cancer only days after the 1973 coup toppled his close friend, socialist President Salvador Allende. Several witnesses have raised doubts about his death recently, including Neruda's driver, who says he was poisoned by government agents. (AP Photo/Laurent Rebours, File)

SANTIAGO, CHILE—Chile’s Communist Party wants a formal investigation into the death of the country’s revered poet Pablo Neruda, who officially died of cancer only days after the 1973 coup toppled his close friend, President Salvador Allende.

Several witnesses have raised doubts about his death recently, including Neruda’s driver, who says he was poisoned by government agents.

Neruda died at the age of 69 on Sept. 23, 1973, 12 days after the coup. He had just published a withering criticism of Gen. Augusto Pinochet’s dictatorship that eulogized Allende and accused Chile’s soldiers of having betrayed their country. He’d won the Nobel Prize for Literature two years earlier, giving him great international prestige.

Neruda died, officially of prostate cancer, in the same clinic where former President Eduardo Frei was allegedly poisoned in 1981 by six people, including several Pinochet agents, who were charged last year in connection with his death. 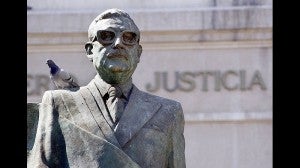 In this Sep. 10, 2003, file photo, a pigeon stands on a statue of Chile's late President Salvador Allende in Santiago, Chile. Nearly 38 years after Chile's former President Salvador Allende died in a military coup, his body was exhumed Monday, May 23, 2011 in an exercise that even now is fraught with political overtones. The hope is that forensics can solve a mystery: whether Allende committed suicide or was murdered by the troops who mounted Gen. Augusto Pinochet's attack on the presidential palace. (AP Photo/Roberto Candia, File)

The Neruda Foundation, which administers his estate and legacy, has said there’s no evidence supporting the driver’s claims.

But Guillermo Teillier, president of the Communist Party that Neruda belonged to, told the Appellate Court in Santiago that it’s a moral requirement to clarify whether Neruda was killed to silence his criticism.

Teillier cited similar doubts about the deaths of Allende, Frei and Allende’s defense minister Jose Toha, who was found hanged in a closet while in military custody. Allende’s remains are being analyzed by an international panel of forensic experts.

Party attorney Eduardo Contreras said in an interview that Araya isn’t the only one questioning Neruda’s death. He said other Neruda employees also raised doubts, and Mexico’s former ambassador to Chile, Gonzalo Martinez Corbala, found Neruda in fine condition a day before his death.

Neruda’s death will now be investigated by Judge Mario Carroza, who is also handling the case of Allende and 725 other unresolved victims of the dictatorship.