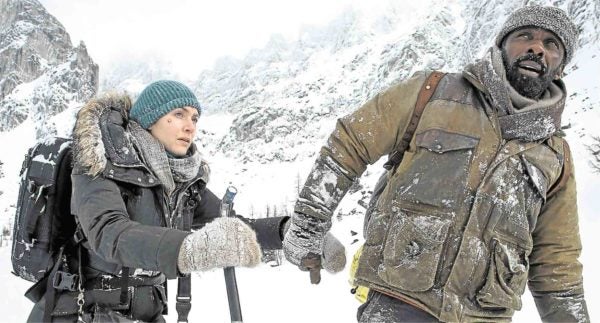 Kate Winslet and Idris Elba star in “The Mountain Between Us.” —Photo courtesy of 20th Century Fox

LOS ANGELES—Idris Elba hobbled into the meeting room with a brace on his left leg. “I tore my ACL (anterior cruciate ligament),” he explained. “It was about four years ago. It healed. I did my kickboxing fight and it survived that. But then, I played a football game in Jamaica, and it didn’t survive that.”

So, to the oft-repeated question if he’s going to be the next 007, the actor said right away, “No, I don’t think we’ll be doing any James Bond movie any time soon. Have you seen my knee?

“The James Bond question often raises its head and I have no answer for it, to be honest. It’s a rumor. I think they’re very satisfied with their current James Bond—and he’s (Daniel Craig) great.”

In the meantime, Idris stars with Kate Winslet in “The Mountain Between Us,” director Hany Abu-Assad’s adaptation of Charles Martin’s novel about a couple who survive a plane crash in a remote snow-blanketed mountain.

To survive, Idris’ surgeon (Ben) and Kate’s journalist (Alex), who didn’t know each other until they got on the ill-fated small plane, embark on a dangerous journey across the wilderness and under harsh winter conditions.

“We shot in Invermere, which is a beautiful part of the Rockies in Canada,” Idris said about their remote mountain location. “It’s the most incredible vista you’ve ever seen. We flew up there by helicopter every day to our set.”

Also a DJ on the side, Idris goes by names like Big Driis and DJ Dris.

Often voted one of the sexiest men, the London native stepped out on the red carpet in the recent Toronto International Film Festival with his new girlfriend, Miss Vancouver 2014 Sabrina Dhowre.

Do you have any fears about flying? I’m not afraid of flying. I fly so much so that I’ve gotten used to it. I did have a flight one time where there was turbulence.

Literally, the plane must have dropped maybe two buildings downwards, very quickly. It was the most frightening experience of my life. But, I did learn to fly a plane in a documentary, so I’m OK with flying.

If you are pushed to extremes, what would I see? Extreme scenarios bring out the inner fear or persons’ instincts. A lot of times we coast. We’re on automatic mode, but when you’re thrown into a situation that’s abnormal, who you are comes out. With me, what you see is what you get. 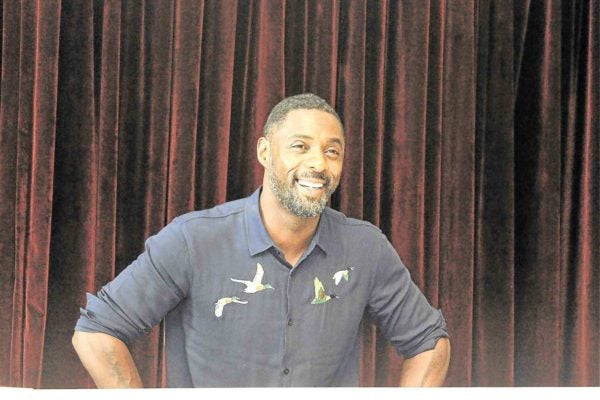 This movie features just you and Kate most of the time. What was that experience like? It was honestly one of my most favorite acting experiences. When it comes to scenes, Kate doesn’t want to say anything that doesn’t feel like the truth, or at least the truth of her character. So Kate, Hany and I went on this massive journey to draw out the truth for every single line.

Needless to say, Kate is an experienced woman and has seen a few relationships. Me, too. So she really harnessed that in what we’re talking about here—what these two characters are going through.

Our working relationship was really good. We challenged each other, take after take. If I did a take that she didn’t think was it, she would say it. And vice versa. We both had that license.

Following up on that, can you talk about working with women? Do you communicate well with women? This sounds like a setup (laughs). I’m a big advocate for powerful female roles behind and in front of the camera.

In my production company, Green Door Pictures, we think about that a lot. Gender balance is important to me in drama.

And as far as me communicating, I think I’m a good communicator. I’ve been told I’m not, once or twice. In working with Kate, you have no choice—you do have to communicate with her. She’s very verbal, very opinionated and that’s great.

Also with Jessica Chastain, whom you worked with in “Molly’s Game”? Ah Jessica, yeah, exactly almost the same. Both of them are professionals and really vocal. But I don’t differentiate from working with men and women. It’s the same energy and feedback I give.

Speaking of communicating, have you ever been speechless and just fell for someone that moment? Yeah, I definitely have gone through that experience of meeting someone and being speechless and falling in love very quickly. I’m a little guarded with my answer on that one because I’m a little private.

The Golden Globe Awards is celebrating its 75th anniversary. In honor of this milestone, what do you remember when you won the best actor-miniseries or movie made for TV for “Luther” in 2012? What I remember is my name being called out. Al Pacino was also nominated. I felt embarrassed that I beat him. I was like, sorry, Al, because he was sitting very close to me, so that was my first instinct. It was a massive achievement for me. It was one of my first major awards.

How would you describe where you are at this point in your life? I’m fulfilled with my work. I’ve had some incredible experiences over the last two years as an actor and as a creator. I feel very excited at this point. I’m very happy. And God willing, I’m healthy, apart from my knee. Yeah, I’m enjoying my midlife.

What are you looking forward about the future? Just more challenging roles as an actor, definitely. I’m 45 now. In the next five years, I’d like to lean more toward directing.

I had an opportunity to direct my first feature (“Yardie”). I’m still in the edit process now, and I love it. You get to talk about acting, camera lenses.

And by osmosis, I’ve picked up so much over my years as an actor, from different directors, that it feels like a second language that I’ve never used before. I’m excited about my future in that (directing).

I’ve been DJ-ing a lot more. The music side of my life is great. I love it because it’s very creative, very different from what I do as an actor.

But, it’s part of my creative process. I think I’ll be doing more music. Maybe the ultimate would be for me to make a film that I act in, direct and score (laughs). That’s my sweet spot.