Laranas goes from fizzle to sizzle 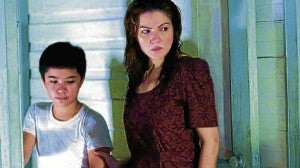 A director is only as good – or as bad – as his last film. Take Yam Laranas, whose “Patient X” we couldn’t make heads and tails out of. But, with the release of “The Road,” he goes from fizzle to sizzle – and gets his filmmaking moxie back!

The three-pronged mystery begins to unravel when three teenagers, Ella, Brian and Janine (Barbie Forteza, Derick Monasterio and Lexi Fernandez), encounter a driverless vehicle on a dirt road in the middle of the night. But, mirth turns to mayhem when strange apparitions start appearing – and following them wherever they go!

In the second episode, sisters Lara (Rhian Ramos) and Joy (Louise delos Reyes) are forced to fight for their lives after they’re abducted by the baby-faced stranger (Alden Richards) whose help they seek out after their car breaks down.

As the investigator digs deeper, however, his sleuthing takes him another decade back – to the disturbing tale of a soft-spoken preacher-father (Marvin Agustin), his abusive, adulterous wife (Carmina Villaroel), and their petrified young son (Renz Valerio).

Despite its share of flaws and some lapses in “practical logic” (Rhian runs in the middle of the road as her abductor gives chase, etc.), the film has a riveting fictional framework whose gripping sections can stand on their own, each with distinctive hues and color palettes that help establish the required mood and atmosphere.

But, there’s more to the episodes than their visual flourishes and technical polish – their narratives flow gracefully as they convey a persistent and stomach-churning sense of disquiet!

Laranas executes each twist with subtlety and confidence – and there are quite a number of them to jolt viewers out of their seats.

But, his bigger accomplishment lies in the fact that he’s turned the annoying leads of “Tween Academy” into attractive stars and credible actors – most notably Valerio and Richards, who are ready for bigger and better roles.

Trinidad, Ramos, Agustin and the lovely Ynna Asistio also come off well – but, the most effective portrayal is turned in by Carmina Villaroel, who is scarier than any contravida we’ve seen in years! How can anyone so lovely be so terrifying?