Why Joshua, McCoy, Nash and Jerome are ‘good sons’ for real 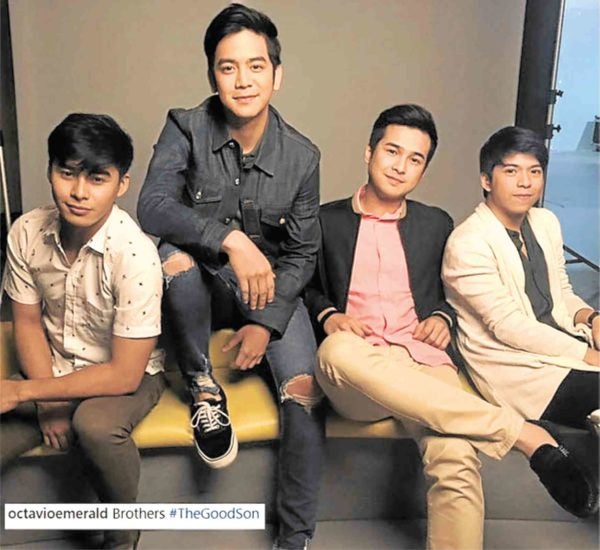 At the tender age of 18, actor Nash Aguas has already put up a Japanese fusion restaurant in Quezon City.

“When my dad left, I had to step up and be more responsible. I knew I had my mom and younger sister to take care of,” Nash revealed at a recent media gathering for the latest ABS-CBN primetime drama, “The Good Son.”

“Their separation has forced me to grow up fast,” he added. On the positive effect of his parents’ breakup on him, the young actor said that if not for that sad experience, he would still “probably be preoccupied with partying and gimmicks.”

He shared that he recently patched things up with his dad, who’s now based in the United States.

Nash’s costar Jerome Ponce also admitted to growing up in a broken home. “I have three other siblings from different mothers,” he told reporters. “Despite the crazy setup, I learned a lot from my dad. He used to reprimand me for playing computer games too often. He advised me not to hang out with the wrong crowd … how to invest my money and run a business.”

Joshua Garcia, who plays another lead character in the series, only has fond memories of his dad. His parents broke up about 10 years ago, leaving him to the care of his Uncle Jerry, a priest.

“I’m closer to my dad. He is both my father and mother. I cherish all of our barkada moments. We’ve had our ups and downs, but it’s through our failures that we learn to be stronger,” Joshua pointed out.

To his dad, Joshua had this to say: “Papa, thank you for guiding me all the way. You taught me how to be responsible. I’ll be the one to fulfill your dreams—I will give you that restaurant you’ve always wanted, and the house you wished for.”

Cast member McCoy de Leon takes pride in having a simple life with both his dad and mom.

“It’s when I have tapings that I get to spend more time and talk with my dad,” he
recalled.

“He would drive me to the set and stay with me there the entire day. Those are some of our happiest times.”

McCoy’s dad, Mark de Leon, is a theater actor. “I just want to tell him: ‘This is our dream, Dad! I’m now finally following in your footsteps. I will be like you.”

“The Good Son” premieres on Sept. 25. The series is about the conflicts that arise from discovering that one’s father has another family.

The patriarch in the show, Victor Buenavidez, is played by Albert Martinez.