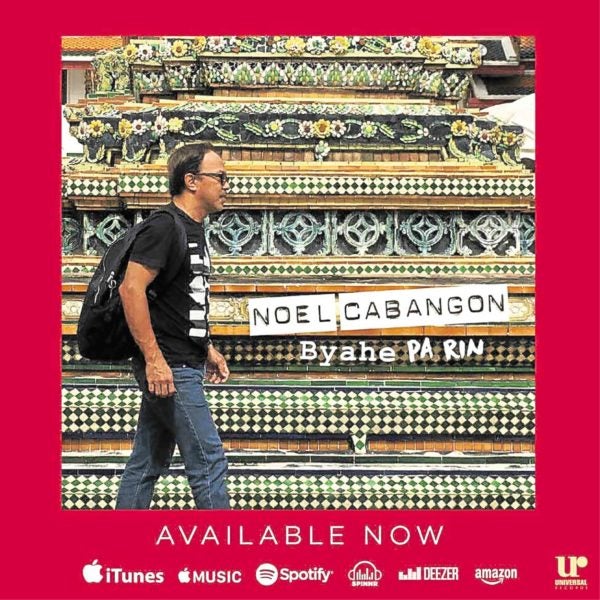 In covering a song, the goal is to try to make it his own, according to Noel Cabangon.

And while other artists—in an attempt to put their own flavor to already popular hits—end up changing or adding too much embellishments to the material, Noel prefers to keep things simple.

“My rule is to veer away from the original. I have to be creative in coming up with ways to render a song differently—the song has to sound new once the public hears it. Sometimes, I change the time signature or tempo,” the seasoned singer-songwriter said in a recent interview.

“Still, I prefer simple or minimal arrangements,” he added. “And I make my them as heartfelt as possible.”

This is the same principle Noel follows in recording his “Byahe” album series, which features his earnest and easy-listening takes on well-loved OPM songs.

But while the series’s first two installments, “Byahe” and “Tuloy ang Byahe,” were mostly acoustic and focused on 1970s and 1980s classics, the latest one “Byahe Pa Rin,” has a marked jazz influence and features more recent songs.

“I have always wanted to be a jazz singer, so there’s an effort to incorporate jazz into the new album and explore other genres,” he pointed out.

In “Byahe Pa Rin,” an 11-track record, Noel revives such songs as “Tadhana” by Up Dharma Down, “Ikaw” by Yeng Constantino, “Hari ng Sablay” by Sugarfree and “With a Smile” by Eraserheads—“modern classics,” as he described them. The album likewise features two original compositions, “Missing You” and “Umiibig.”

“I had some of them listen to my version of their songs. And they liked it, thankfully,” quipped Noel, who would like to collaborate with newer artists, including rapper Abra and singer-songwriter Reese Lansangan.

Is the relatively younger repertoire a reflection of his desire to tap into a younger market? “There’s that attempt,” Noel said. “But my main audience, still, are the people from my generation who still buy physical albums.”

Read Next
2 things Raymond Bagatsing taught younger bro RK
EDITORS' PICK
Every Filipino home can now be a smart home with realme TechLife
PLDT Home Prepaid WiFi customers now under the care of Smart
Nestlé Philippines’ ‘NESCAFÉ Plan’ bags Grand Anvil at PRSP 56th Anvil Awards
Wesley So officially a US citizen
‘Pilgrim of peace’ Pope Francis heads to war-scarred Iraq
WHO: Arrival of vaccines in PH ‘a powerful step’ towards economic recovery, normalcy
MOST READ
Kris Aquino dispels rumors on son Josh getting married, thanks Ogie Diaz for defending him
LTO’s P500-M deal for screws draws scrutiny
Wesley So officially a US citizen
Ginebra trades Slaughter to NorthPort for Standhardinger
Don't miss out on the latest news and information.