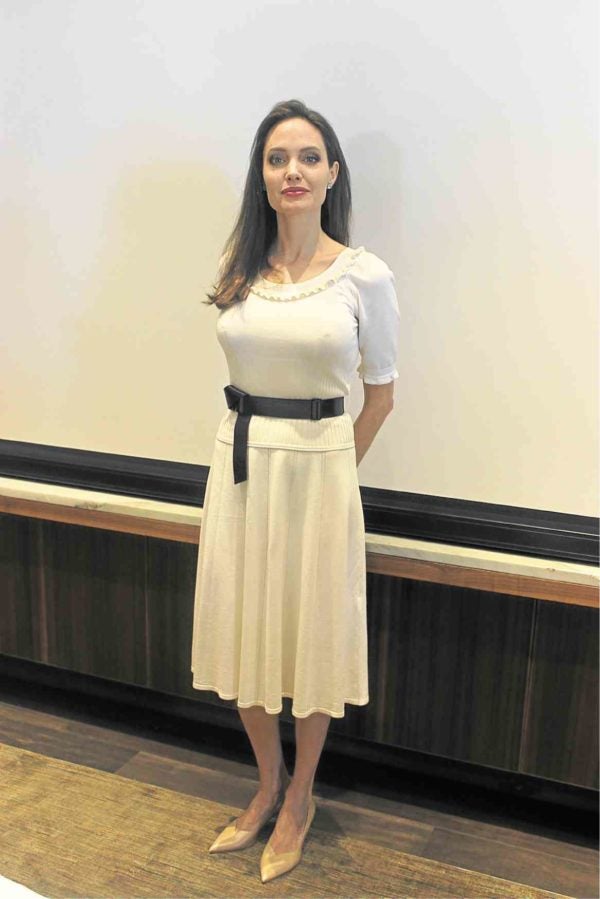 LOS ANGELES—In one of her first interviews since separating from Brad Pitt, Angelina Jolie described this period in her life as “very difficult.”

The actress-director opened up about the split, which she referred to as “family issues,” as she touted “First They Killed My Father”—the new film that is being hailed as her best work so far as a director.

“It is hard. This is the first time I’ve actually been doing this (interview) after a long time,” remarked Angelina in our recent conversation at the Four Seasons Hotel in Los Angeles. “It’s not easy. I’m a little shy at this time, because I am not as strong inside as I’ve been in the past.”

The actress, filmmaker, humanitarian and mom turned a bit emotional and got misty-eyed at certain points in our chat, especially as she talked about her six kids. However, she was forthright, as usual, one of the things we enjoy when we chat with her. She occasionally clasped her hands as she answered our questions with her typical candor.

Wearing a simple off-white dress by Bottega Veneta, Angelina also discussed her powerful adaptation of Loung Ung’s bestselling memoir book about the Cambodian genocide, “First They Killed My Father: A Daughter of Cambodia Remembers.” The film earned a standing ovation when it was recently screened at the Telluride Film Festival.

Loung wrote about her memories as a child in the ’70s when the Khmer Rouge took over Cambodia and wiped out an estimated 2 million people. She and Angelina collaborated on the screenplay. It is a deeply personal passion project for Angelina, who found Maddox, her oldest son, in a Cambodian orphanage that Loung told her about. She was filming “Lara Croft: Tomb Raider” in the Southeast Asian country at the time.

“I actually couldn’t be at the final post (production for the film),” Angelina admitted. “I couldn’t be there because of family issues. So sometimes, it appears I’m pulling it all together, but in fact, I’m just trying to get through my days. But if you love what you do, then you tend to push forward and enjoy it.”

The result is a stirring film released by Netflix, anchored by the fine performance of Sareum Srey Moch, who had no experience in acting, yet gave a nuanced portrayal of Loung, who was only 5 years old when the Khmer Rouge came to power and drastically changed her life and that of thousands of Cambodians. Loung lost her parents and two of her six siblings. The film is also a moving story of survival and love among Loung and her other siblings amid horrific circumstances.

Angelina is back in top form as a director after “By the Sea,” her straightforward drama film with Brad which was panned by the critics and failed at the box-office. Ironically, Angelina fares better with logistically more complicated war dramas, like “In the Land of Blood and Honey” and “Unbroken.”

It was apparently while Angelina was making “First They Killed My Father,” especially during postproduction, that whatever issues were simmering between her and Brad began to boil over. She filed for divorce in September 2016. Brad told GQ magazine that he has stopped his heavy drinking, which is reportedly one of the factors that led to the split. 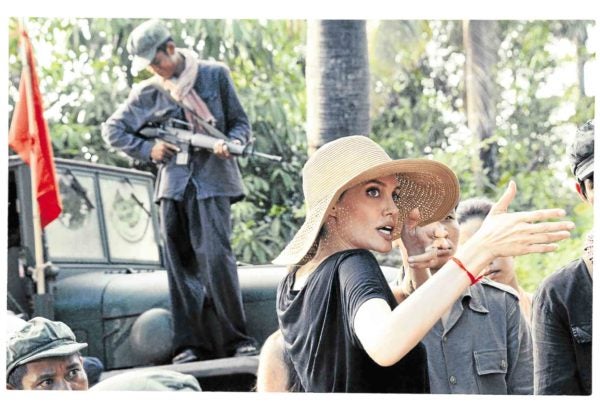 Angelina Jolie on the Cambodian set of “First They Killed My Father,” which is being hailed as her best work as a director. —PHOTO COURTESY OF NETFLIX

“For me, this last year has been difficult,” admitted the 42-year-old, who is a special envoy for the United Nations High Commissioner for Refugees.

“I haven’t actually worked other than focusing on the work in Nairobi (which hosts more than 490,000 refugees, many of them victims of sexual and gender-based violence) and my teaching (she’s a visiting professor for a new master’s program on women at the London School of Economics). I’ve spent most of my days just taking care of the children.”

On her health, the mother recently told a magazine that she had a bout of Bell’s palsy (a temporary facial paralysis) and hypertension. Cancer risks led the actress to have a preventive double mastectomy and her ovaries removed.

“So much in life you just focus on how much worse it could be,” said the solo parent of Maddox, 16; Pax, 13; Zahara, 12; Shiloh, 11; and twins Knox and Vivienne, 9 (the first three are adopted, while the last three are her biological kids with Brad). “I’m so happy I don’t have cancer, that I had the surgeries that will hopefully prevent me from getting cancer. And if I get it, it will be delayed for a few years. Chemo will be delayed a few years and the exchange for that peace of mind is quite good.

“I feel that my body has sometimes taken a hit with all the things that I had to do. Then, emotionally, it’s been a very difficult year on top of it. I have had other health issues in the last few years. So, my health is something that I have to monitor.”

With a smile, Angelina stressed, “But the only thing I do is try to laugh as much as possible. We tend to get so stressed that our children feel our stress. They need to feel our joy and have joy. For everything that we go through, just living every day, and while you are healthy and even if you’re going through chemo, find the ability to live, love and laugh. It may sound like a postcard, but it’s true.”

On being single again, she was empathic: “I don’t enjoy it. It’s not something I wanted. There’s just nothing nice about it. It’s just hard.” She did not talk about the media reports that the divorce is on hold.

Angelina smiled again as she answered about how her kids have been supporting each other. “They have been amazing,” she pointed out. “It’s been so moving to see how much they have helped each other, stood together—the big brothers helping the little kids, and all of them helping me. They have really come into their own during this time. They’re finding themselves and their voices.

“They’re just like (Loung and her siblings) in the film. I know that they will have each other for life. It gives me great peace to know the day I pass away that they will take care of each other.”

Asked if she still flies planes, Angelina dropped a surprise—even her sons are also now soaring in the sky like their adventurous mom.

“Oh my goodness,” she began. “I still fly. It’s been a while, because life takes over. But my boys are all flying. They’re all taking lessons—even Knox. He likes it, but you have to help him with the pedals. Actually, they’re flying so much that there’s no space for mom (laughs).

“I always feel like the best adventure is the next one. But now, with the kids, [it’s] nice to be able to think they’re my partners. And what are we going to do and where are we going to go?”

Cambodia, which granted an honorary citizenship to Angelina for her conservation work in that country, is a frequent destination.

The filmmaker was given unprecedented access to shoot “First…” for 50 days in Siem Reap and Battambang (where she first saw Maddox lying in a box). “It was wonderful,” she recalled. “We lived in the country [for] over four months. That was so special.”

But, she had to be careful because recreating Khmer Rouge’s harrowing, cruel Communist regime was painful for some Cambodians to see and think about again.

The multitasking parent confirmed that she’s adding a new skill. “I’m going to cooking classes,” she said. “I am not sure how good I am at it. The thing is, cooking is one of those things that is perfect when you’re settled in your life, you take that time and you can enjoy food and cooking.

“Somehow, I’m just very impatient. I am a little erratic, so it’s hard to stand in the kitchen. I am trying because if I cook, the kids all hang out, and they just love it. They often take over and tell me that they can do it better (laughs).

“So I … thought that maybe it’s a genius thing to do as a woman to say, ‘I can’t cook,’ because now, all my children can cook really well. I joke that I did it on purpose, but they can actually cook better than me.”

We picture the glamorous mom cooking, surrounded by her six children, in their new digs, an LA mansion that was once owned by mogul Cecil B. DeMille.

So, what else is left to challenge her as a parent? “I’m not very good at just letting things happen,” she replied. It’s probably the understatement of the year. This woman didn’t get to where she was by being a slacker.

“I can’t help myself, I’ll try to jump in,” remarked Angelina as she beamed, which put a glow on her face, set off by red lipstick and framed by her long hair arranged on the right side.

“As I said before, we focus so much on many things. But making sure our children have a sense of joy isn’t a small thing. We want to make sure that they have a sense of purpose, of course.

“So, the challenges are when there are heavy things going on. I have teenagers now—there are all the complications that come with it. I’m just hoping that nobody will ever be as difficult as I was,” conceded the daughter of actors, Jon Voight and the late Marcheline Bertrand. She was a punk outsider in high school with a penchant for knife play, and she experimented with drugs. “So far, they are not.”