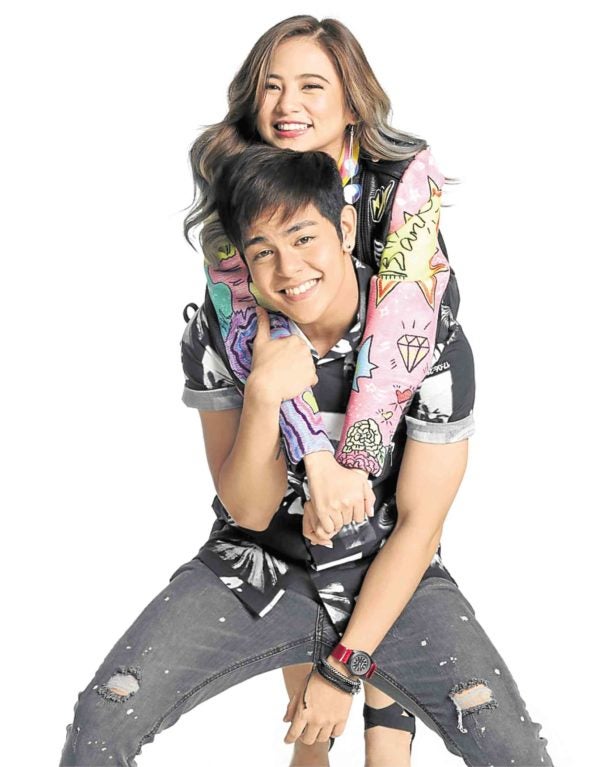 Teen dance sensations Ella Cruz and Julian Trono try a new groove in their Viva-produced launching movie, “Fangirl/Fanboy” (opens tomorrow). The film is very “in” since it centers on K-Pop fever.

Julian’s character, Ollie, is a one-hit boy wonder with a level of confidence that borders on conceit. He goes gaga over Korean actress Soo Mi-young (played by Yam Concepcion), Ella, meanwhile, is Aimee, Soo’s dubber.

Hilarious twists and romantic turns happen when Ollie meets Aimee, who happens to be his biggest fan. Oh, what idol worship can do!

Here’s my chat with Ella:

How do you feel that your team-up with Julian is being dubbed as Viva Films’ next “JaDine”? It’s an honor, but we’d rather take a different path. No love team can replace JaDine. So, Julian and I would like to establish JulianElla in our own style.

What’s the craziest thing that a fan did for you? Crazy, but in a positive way, when they bring me gifts that they made themselves, like sketches and cross-stitch images of me.

Is Julian boyfriend material?  Yes, because he makes me feel appreciated and accepts my flaws. He’s nurturing. He’s kind of possessive, but in a good way. He’s the type of guy I’d like to talk to every day, because he talks with sense.

If you meet your idols, what would you ask them? I’m a fan of Black Pink, Girls’ Generation, Twice and Hyuna. If I meet Hyuna, I don’t know what I’d say to her. But, I’d ask if I could dance with her.

What’s the hashtag of your life right now? #LivingMyDreams.

What’s one question about love that you need to be answered? Why do some people pretend that they love you?

Here’s my chat with Julian:

How do you handle fans who are too aggressive? It’s not easy, actually. You can never tell if they are really aggressive or they’re just excited to see you. What I do is … I try to at least converse with them and calm them down. It always works.

What do you find hard to understand about girls? They’re somewhat indecisive. Not that they can’t decide but  because they weigh things. It’s a quality that’s unique to women and that most men struggle with.

What do you find most attractive about Ella? It’s what people can’t see—like when the camera isn’t rolling anymore. She’s very appreciative.

What’s the craziest thing you’ve done for a girl? Love her.

What’s your fave scene in the movie?  The car scene because it is the first scene that we shot.

What’s the best and the hardest part of being a millennial? Having that old soul and young spirit combined is the best thing. I call it the shared generation as well … where we get to cross over eras—from music, films to fashion. The various choices we have to define our being … But the tough part is dealing with the misconception that we are reckless, carefree and rebellious.

Helpless Celebrity (HC) finds it weird that someone from the past and somebody in the present seem to be in cahoots. At the rate things are going, looks like they will no longer be in HC’s future.

Read Next
Ronnie Alonte : I don’t have a love life
EDITORS' PICK
Smart Prepaid encourages the youth to take their passions to the next level and ‘Live GIGA’
DOF to PITC: Return P1 billion in interest on ‘idle’ funds
Experience clearer calls nationwide with Smart VoLTE
Año to public, officials: Refrain from holding events
Arthaland’s property management arm utilizes Amazon Web Services to enhance delivery of service
Watershed degradation abetted flooding, says scientists’ group
MOST READ
‘What is mine is hers,’ says Matteo on sharing finances with his Popstar Royalty wife
Año: Gov’t to conduct fact-finding on mass gatherings attended by Roque, Pacquiao
’Blind obedience’: Robredo twits Briones for pleasing only Duterte, not teachers, students
Singaporean gives birth to baby with COVID-19 antibodies — report
Don't miss out on the latest news and information.