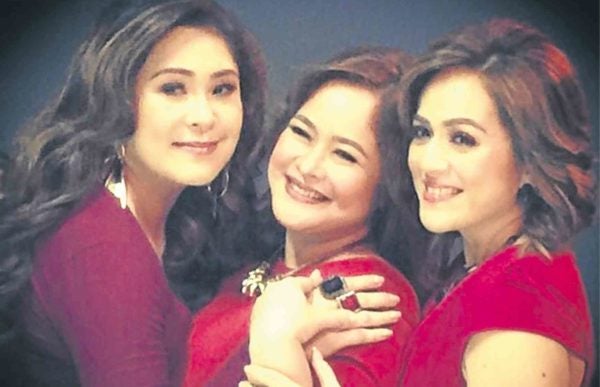 Stars come and go—and very few of them have the staying power of Manilyn Reynes, Tina Paner and Sheryl Cruz, who are still very much on the scene.

Individually, Manilyn, Tina and Sheryl have amassed their own string of hit songs enough to fill up a major act.

How’s that for “Three’s Kanta-ny?”

Here’s my chat with Manilyn (M) and Sheryl (S):

M: The grand launch of the original batch. We were all in white tuxes. The song was “We Built This City.” So, I get nostalgic when I hear that song. I also remember when the boy band Menudo was our guest—and we all went crazy!

What was the biggest test that your friendship has gone through?

M: When we led separate lives and careers. It made me sad, because I was so used to being around them. But, we managed to pick up from where we left off when Tina and Sheryl came home after living abroad for many years.

S: The three of us were pitted against each other. That was the nature of our fans. It could have affected our friendship, but we didn’t let it get in the way.

What’s the naughtiest thing you did during your younger days?

M: When the three of us were shooting “Batang Quiapo,” we got bored during a break. We were at our standby area (the den) eating pizza. Then, we played a prank by stuffing the oriental jars all over the house with pizza.

How do you resolve misunderstandings?

M: We bring the favorite food of the one who’s “making tampo.” There’s nothing that eating together can’t resolve.

S: We talk about it personally, unlike young people today who vent on social media.

What do you love most about your friendship?

M: Spontaneity. We aren’t judgmental of each other. We can even go hours without talking, just enjoying each other’s company.

S: We are comfortable with each other. We share an affinity, being mothers and artists.

M: Never stop learning. Accept criticism. Acknowledge that there are areas you need to improve on. Compete with yourself and not with anybody else. Have a positive disposition, and always be thankful to God for the blessings that come your way.

S: Be professional. Don’t let popularity get into your head. Be kind to fans.

If you could be a teen star all over again, what would you do differently?

M: None. My teen star years will always be in my “happy memory ” box.

What excites and scares you about your concert?

M: No fear. Just excitement, since it’s our first concert ever as the “Triplet.”

S: It’s going to be a challenge doing choreography. We must keep up with our millennial guests, including Ivan Dorschner, Addy Raj, Jak Roberto and Ken Chan. We’re excited to see our fans’ reactions to the “surprises” we have in store for them.