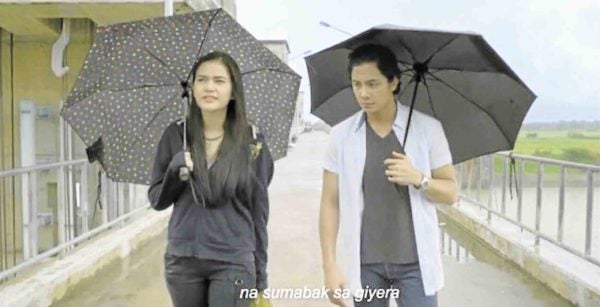 Film buffs profess to be supportive of the country’s surging indie movie industry, but bewail their inability to access them due to lack of regular screening venues. Last Aug. 16 to 22, however, they lost that alibi, when the first Pista ng Pelikulang Pilipino gave indie movies many screening opportunities.

We hope that viewers took advantage of that golden opportunity to view and support our indie filmmakers’ best efforts—and trust that the noble “experiment,” courtesy of the Film Development Council of the Philippines, will have a return engagement midyear in 2018 in our cineplexes.

For our part, one of the Pista offerings we caught was Jason Paul Laxamana’s “100 Tula Para Kay Stella.” It was about a stutterer who fell in love with a liberated female rocker, but felt so undeserving of her attention that he expressed himself only in short poems—that he was too shy to let her read.

The stutterer’s role was played by JC Santos, who did his best but failed to naturally embody the constricted and lonely character assigned to him.

Happily, Bela Padilla fared much better as his secret love, filling the screen with her vivid vitality and complexity.

We’ve seen Bela in many roles on TV and the big screen, and have generally found her to be just a pretty and proficient player. As Stella in “100 Tula,” however, she flares and flashes with focused thespic brio and insight—a standout success, at long last.

Other plus points for the movie include some character performances, like the ones turned in by Ana Abad Santos, Prince Stefan and Ivan Padilla.

Less successful was the film’s handling of its school and “teen frolic” scenes, which sometimes felt staged, and merely assigned sundry lines to sundry actors.

Another drawback was the fact that too many of the 100 poems in the movie weren’t as notable as they needed to be. —After all, their development through the months and years of the movie’s storytelling was supposed to express and “mirror” the nerd-protagonist’s growth, as writer, person and mute lover.

Also less than choice was the movie’s extended ending, which was tasked with so many objectives that it made the production feel “bottom-heavy.”

Despite these and other niggling notes, “100 Tula” clicks with young viewers, who appreciate its unusual pairing of a lonely nerd and a liberated “user” chick.

The fact that these diametrically-opposite types are able to connect with and help each other (to some extent) is an unexpected outcome that gives other young people hope.

To be sure, the film does not have a happy ending, since circumstances make the protagonists unable to realize and express their love for each other by the final fade.

What they do express (albeit “bottom-heavily”) is the fact that they’ve both learned from the less than “solved” experience.

The hope is that young and young-adult viewers will be similarly “insighted” in how they have learned to handle or at least come to terms with their own contentious love and life conundrums.