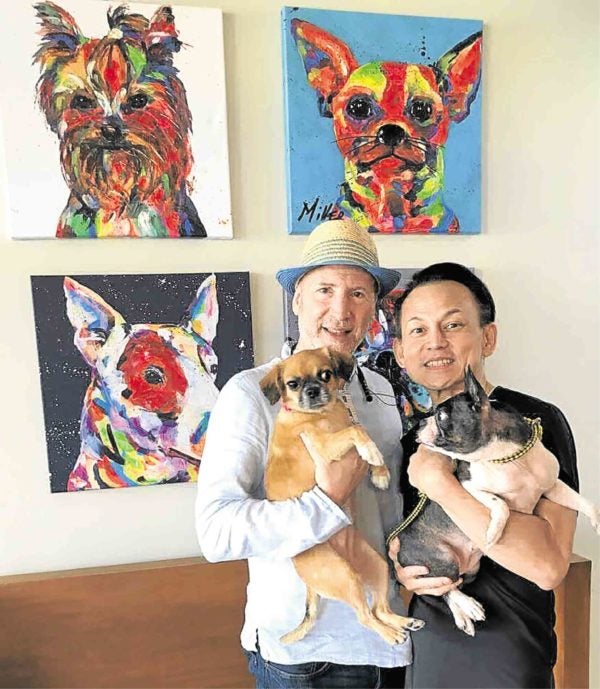 West Stewart with Bernadette (left) and Jon Santos with Cookie

The prized pets often share the stage with Jon and West at curtain call, after the former’s stand-up comedy shows.

“Ms Cookie, a Boston Terrier, was a gift from West four years ago,” Jon recalls. “He acquired her from a student breeder in Tondo. West named her after his favorite Cuban baseball player as a kid, Cookie Rojas, who is now a TV commentator in Miami, Florida.”

Ms Bernadette, on the other hand, joined the family a year ago. “She was a gift from Jon’s uncle, who breeds small dogs in Pampanga,” West relates. “He called her a ‘designer Chihuahua’ since she’s a mix of Chihuahua and Pug. We named her after Jon’s character in the stage musical, ‘Priscilla, Queen of the Desert.’”

Jon says of their life with their furry kids: “It’s been pure joy. We live in a small household, a condo with no staff, so we’re very hands-on.”

West notes that “chores are shared.” “They enjoy their morning and evening walks through the neighborhood (for their no. 1 and no. 2) and Jon cleans off their feet and looks for ‘hitchhikers’ in the fur.”

Jon volunteers that their babies “eat twice a day. West usually chops the apples for freezing. Apples and ice cubes are their favorite treats.”

They also visit Team Dr. Nielsen Donato at Vets in Practice (VIP). “They’ve had their little health issues, mostly skin-related and a broken knee cap for Ms Bernadette. She’s had surgery, so she now has a reconstructed knee!”

Ms Cookie, for her part, has had allergies. “She was recently on the operating table, to correct an equilibrium problem,” West explains.

“Checkups are every other month at VIP,” West remarks. “We put them up at the Doggie Hotel whenever we leave the country.”

“We knew early on that taking on pets would be a big responsibility,” Jon admits. “In fact, we probably talked and fretted about it for more than five years! West wanted a Boston Terrier, and I was concerned about the time required to make a good home for her. Fortunately, West grew up with dogs all his life. In his household, the first member, after mom and dad, was the Manchester Terrier named Lady.”

West asserts: “But Jon knew well about pets. His first roommate, fellow writer Cecille Matutina, absolutely loves cats, and would take in strays, feeding them on the doorstep of the house. Through Cecille, he gained an appreciation of how this planet is best shared with all types of living things.”

Jon points out: “We recommend having pets to anyone with a loving heart. You don’t need a lot of money and a big yard to keep them happy.”

Jon and West celebrated their 12th anniversary as a married couple last Aug. 24. (They tied the knot in a civil ceremony in Toronto, Canada, in 2005.)

While Jon is preparing for the launch of his new show “Undressed” in October and for the repeat of “Live Love Laugh” in November, the couple’s next big project is a herb garden. “We do know this will take a lot more time, as our thumbs are the farthest from green,” Jon quips.