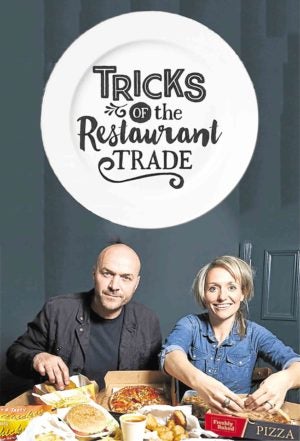 “Tricks of the Restaurant Trade”

Viewers who’ve had unsatisfying meals in restaurants and fast-food joints and have had to pay too much for the pain and abuse will want to watch the TLC show, “Tricks of the Restaurant Trade,” out of a desperate need for self-defense and preservation.

True to its feisty title, the show hosted by chef Simon Rimmer and “culinary investigator” Kate Quilton has made it its no-nonsense mission to expose some “dark” secrets of how posh eating places sometimes pull the wool over customers’ eyes to make more profits than the questionable quality of their food and service merits.

Recent telecasts have exposed the lack of actual nutritional value in some fancy places’ “minimal cuisine” or degustacion offerings—and, at the other end of the culinary equation, how “eating BIG” at some fast-food outlets can be really dangerous to your health—not to mention your pocket.

Another investigative foray tried to figure out the secret ingredients in a famous chicken house’s signature claim to fame, with Rimmer using his vast culinary experience to guess the 10 exotic spices and condiments that have made its particular offering a big hit for many decades now.

The determined chef-investigator was so good at “educated guesswork” that he managed to pass a blindfolded taste test that involved an employee of the fried chicken chain, no less.

But, in the final analysis, the employee still intuitively chose the taste he’d gotten used to for years—so completely that it had become a part, not just of his smell and taste buds, but also of his psyche!

The show also helped viewers avoid being “manipulated” by restos to spend more for less, by exposing the subliminal enticements of menus.

The way that a particular dish is positioned on the menu subjectively affects its chances of being ordered by the customer, as well as the “delicious” words chosen to stylishly describe it.

These psychological ploys are employed especially when it comes to high-priced items, which restos need to push really hard in order to significantly boost their monthly profit margins.

Another revealing feature compared a dish’s actual cost in terms of the value of the food products and cooking expenses expended to produce it, and viewer-diners were in awe of the huge profits made!

Also eye-opening was the show’s exposé on where the food being offered is actually coming from. Diners presume that what they order in a resto is actually being cooked and prepared fresh there—but, surprise, that isn’t necessarily the case.

For instance, desserts are often ordered from big service bakeries that cater to the restaurant trade, and what restos pay for them when ordered in bulk is a mere fraction of what they charge their customers. Profits galore, pa more, pa more!