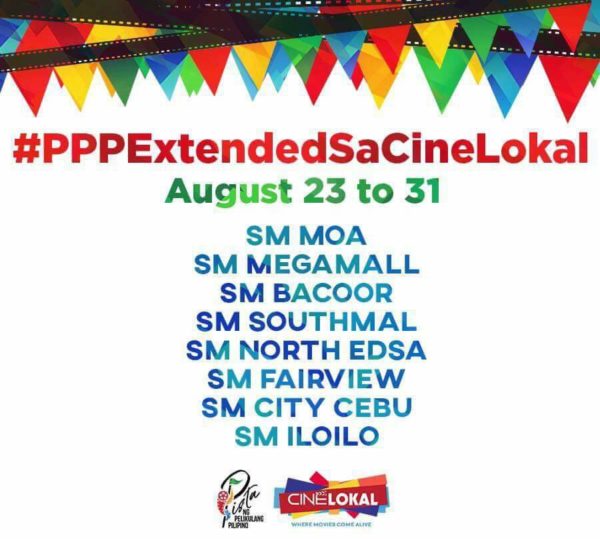 Because Pista ng Pelikulang Pilipino (PPP) turned out to be a success, the clamor for an extended screening was heeded.

Eight PPP entries will be extending their run to Cine Lokal, a new cinema line that will house independent and award-winning films in select SM Cinema branches across the country.

In a recent Facebook post by the Film Development Council of the Philippines (FDCP) chairman Liza Diño-Seguerra, an announcement of the PPP extension was made. It stated the schedules and cinemas where the movies will be screened. 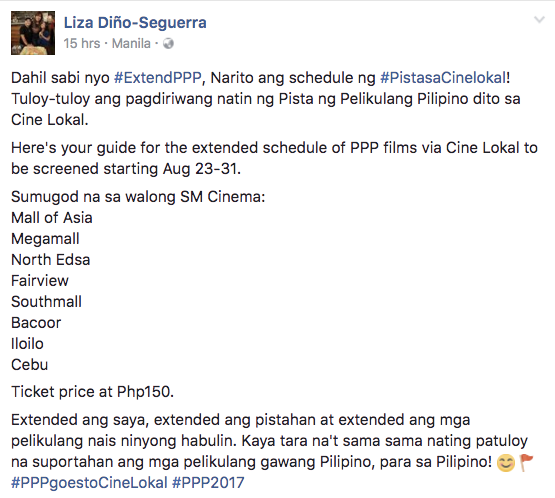 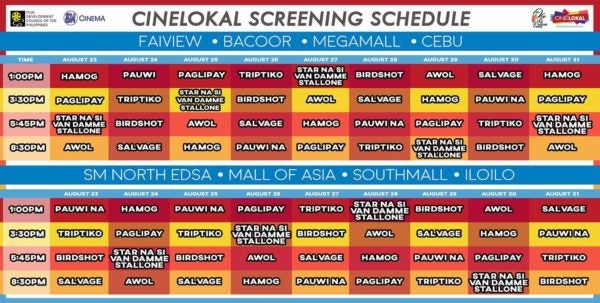 CineLokal screening schedule as posted by Liza Dińo-Seguerra on Facebook

In another post last Tuesday, Diño thanked the viewers who supported the PPP. Part of her announcement turned out to be a surprise for the viewers.

(FDCP is happy to announce that three entries from the PPP: “100 Tula Para Kay Stella”, “Bar Boys” and “Patay Na Si Hesus” will extend their run in select cinemas nationwide, starting August 23, as part of these cinemas’ regular theater run.)

(And because these films are no longer included in #PPP2017, all PPP promos and discounts can no longer be used except in SM Cinemas.)

Diño expressed her gratitude for the massive success of PPP.

(Again, my sincerest thanks for making the PPP week a success. People lined up, watched and praised the films. Let’s celebrate Philippine cinema! #PPP2017)

PPP’s one-week run has generated P149.5 million as total gross. Earnings are still pouring in from the extended screening. JB