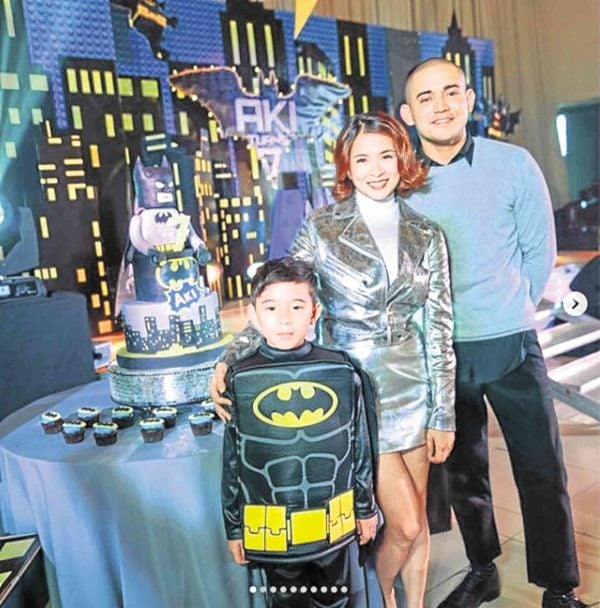 Paolo Contis’ bond with girlfriend LJ Reyes’ 7-year-old son, Aki, has earned the admiration of netizens, some of whom lauded the actor for being a “father figure” to the boy in the absence of his biological father, Paulo Avelino.

But he didn’t intend things to appear that way, stressed Paolo, who sees himself as more of a “friend” to Aki.

“I will always be there for him. He knows that he can tell me everything, because we’re friends. And I think that’s more fun, a strong foundation,” he told reporters at a press conference for the second season of GMA 7’s “Alyas Robin Hood.”

In Aki’s recent Batman-themed birthday party and accompanying photo shoot, it was Paolo, and not Paulo, who stood beside the kid and LJ.

The relationship Paolo has with Aki didn’t materialize overnight; he had to earn it.

“A kid’s love and respect … you don’t get those by just playing with him or giving him toys. It took time for us to have that kind of closeness,” he said, adding that he genuinely cares for Aki.

“I made it very clear with LJ from the get-go I wouldn’t dare use her kid just so I could win her over,” added the 33-year-old Kapuso talent, who plays Daniel Acosta, a principled police officer, in “Alyas.”

Paolo described Aki as a “sweet boy [who’s] very easy to love.” That’s why he’s thankful that LJ let him into her and her child’s lives.

“LJ is protective of her son, so it did take time before she entrusted him to me. And I’m glad she gave [me] a chance to do that,” related Paolo, who usually bonds with Aki over video games.

“I’m not into gaming, actually, but I have no choice,” he quipped, laughing. “We play ‘Call of Duty,’ and I just let him beat me. And he really enjoys that!”

According to Paolo, his romance with LJ is “very serious,” and that they do think about their future together. But there’s nothing concrete yet—not until he irons out the kinks in his previous relationship.

“We want to make sure everything’s fixed, before we plan anything specific,” pointed out Paolo, who’s still seeking the annulment of his marriage to estranged wife Lian Paz, with whom he has two daughters who are roughly the same age as Aki.

“The plans will come eventually. We have to fix our issues first, so that everything will be smooth after,” he added.