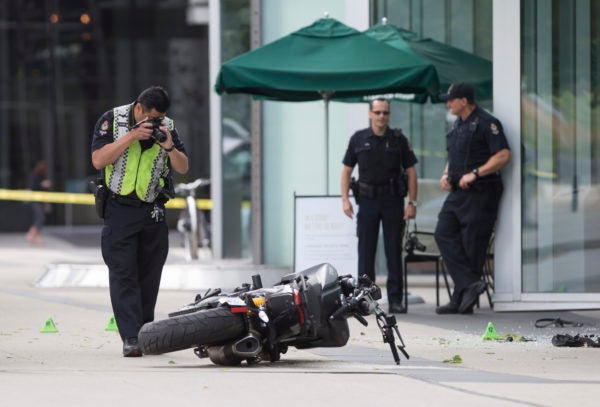 A police officer photographs a motorcycle after a female stunt driver working on the movie ‘Deadpool 2’ died after a crash on set, in Vancouver, B.C., Canada, on Monday Aug. 14, 2017. Vancouver police say the driver was on a motorcycle when the crash occurred on the movie set on Monday morning.  AP

Reynolds released a statement on Twitter a few hours after the accident near the waterfront in downtown Vancouver, British Columbia.

“Today, we tragically lost a member of our crew while filming Deadpool,” the actor wrote. “We’re heartbroken, shocked and devastated… but recognize nothing can compare to the grief and inexplicable pain her family and loved ones must feel in this moment.”

Reynolds said his heart “pours out to them — along with each and every person she touched in this world.”

The motorcycle crash happened near the Shaw Tower office building, where a crumpled motorcycle was seen lying on its side and a window was smashed.

Nathan Kramchynski, who works on the seventh floor of Shaw Tower, said he watched rehearsals of the stunt outside the Vancouver Convention Centre. The stunt woman had been riding the motorcycle down a set of stairs from the center and stopped when she reached the street, he said.

But when the accident happened, the driver appeared to pick up speed, crossed the street and swerved to avoid pedestrians before disappearing from his view, Kramchynski said.

“She lost control really quickly. It happened in a split second,” he said. “She was going full throttle and then there’s a building there.”

Another witness, Sharmina Kermalli, said she had just walked into a Starbucks next door to where the accident happened when she heard a loud crash. She ran outside and saw glass still falling on the body of the motorcycle driver.

The name of the stunt woman was not immediately released.

Police said officers were at the scene and investigators for WorkSafeBC, the provincial workplace safety agency, were also looking into the crash.

Reynolds, a native of Vancouver, plays the title role of Deadpool, who is a Marvel Comics superhero.

“We are deeply saddened by the accident that occurred on the set of ‘Deadpool 2’ this morning.  Our hearts and prayers are with the family, friends and colleagues of our crew member during this difficult time,” said a spokesman for 20th Century Fox.

A stuntman was fatally injured last month in Georgia during production of “The Walking Dead.” He fell head-first onto concrete about 22 feet (7 meters) below after appearing to try to grab a railing to stop his fall. CBB