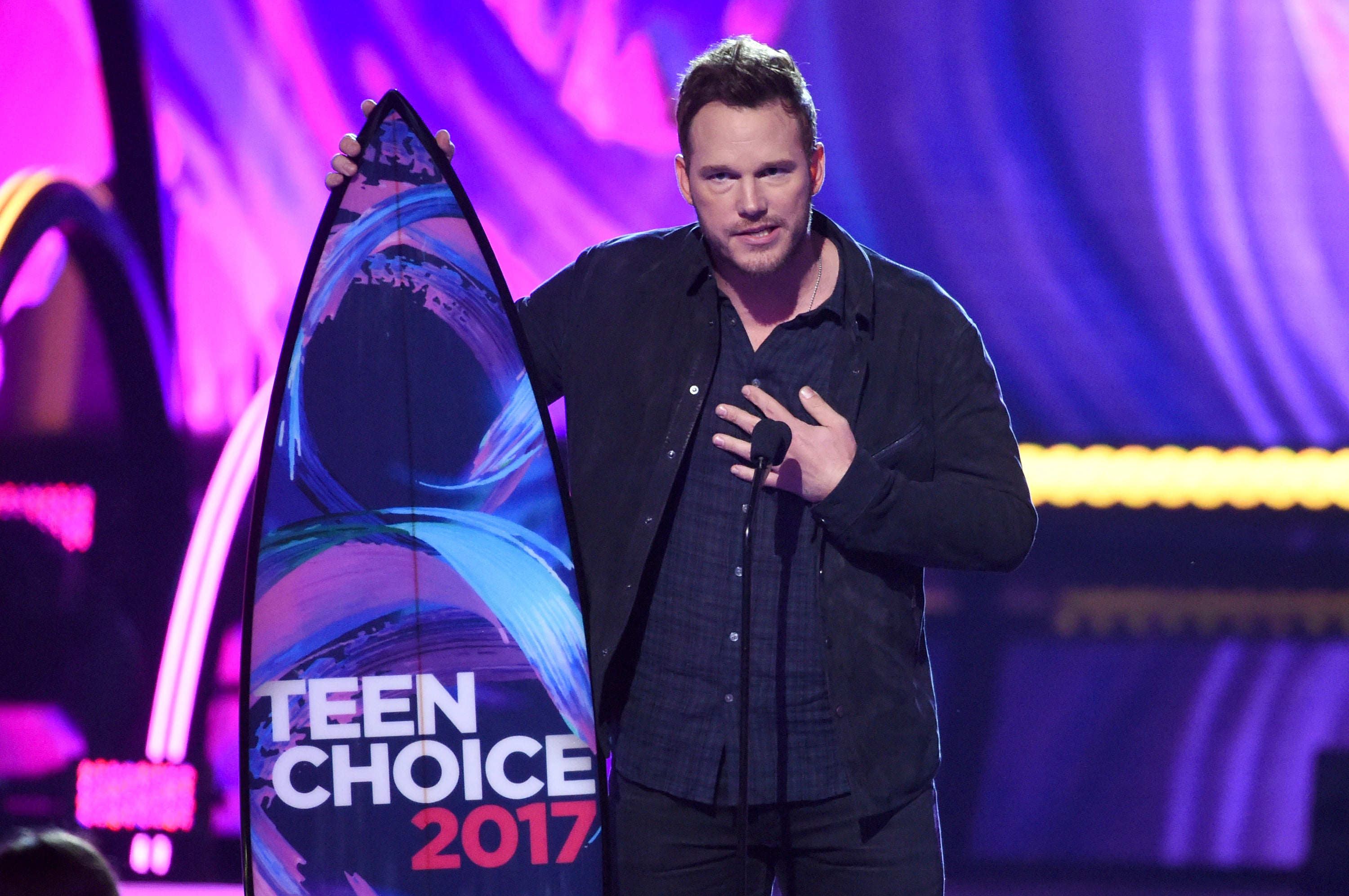 Chris Pratt accepts the award for choice sci-fi movie actor for “Guardians of the Galaxy Vol. 2” at the Teen Choice Awards at the Galen Center on Sunday, Aug. 13, 2017, in Los Angeles. (Photo by Phil McCarten/Invision/AP)

LOS ANGELES — The Teen Choice Awards, always a bubble of teenage celebration, took time out during Sunday night’s ceremony to consider the world its young audience will inherit.

Hashtags, surfboards and loud shrieks dominated the Teen Choice Awards, as usual, with YouTube star Jake Paul presiding over a show designed to be tweeted, Snapchatted and put on Instagram. But with the two-hour broadcast coming a day after the violence at a rally of white nationalists in Charlottesville, Virginia, some winners pleaded for teen viewers to do better than their elders.

“With all the injustice and the hatred and everything that’s happened not only in the world but in our country right now, I need for you young people, I need you guys to be educated. I need you to listen. I need you to pay attention,” said “Spider-Man: Homecoming” actress Zendaya, accepting an award for best summer movie actress. 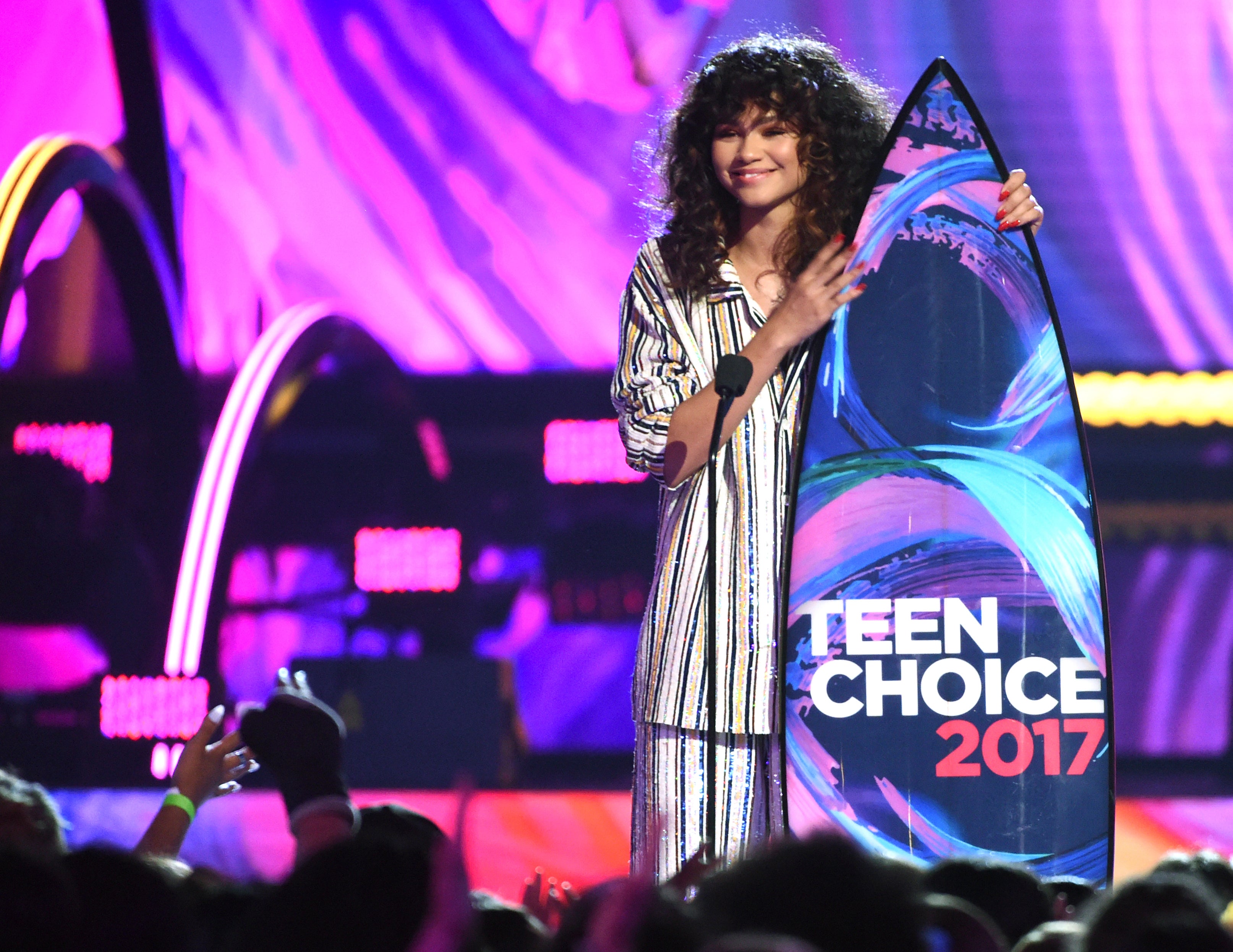 Zendaya accepts the award for choice summer movie actress for “Spider-Man: Homecoming” at the Teen Choice Awards at the Galen Center on Sunday, Aug. 13, 2017, in Los Angeles. (Photo by Phil McCarten/Invision/AP)

“You are the future presidents, the future senators,” she added, clutching the show’s trademark surfboard award. “You guys are the ones who are going to make this world better.”

The music performance-stuffed show, broadcast live on Fox from Los Angeles, followed a three-hour “Teen Fest” concert in downtown Los Angeles that was streamed on YouTube.

Miley Cyrus, an 18-time Teen Choice award winner, was to receive the ceremony’s highest honor, the Ultimate Choice Award. But she was announced as a last-minute cancellation early in the ceremony. “I know,” said presenter Victoria Justice. “It’s a bummer.” (Cyrus apologized on Twitter saying she created “an unrealistic schedule for myself.”)

Many of the other biggest names either sent video acceptances (Bruno Mars, Gal Gadot) or were merely announced as winners (Beyonce, Zac Efron, Ariana Grande). One notable exception was Chris Pratt, who dropped by to accept his two movie awards. Pratt and his wife, Anna Farris, recently announced their separation.

That still left many teen idols for the crowd to cheer, including the cast of the CW drama series “Riverdale” (winner of seven awards) and the group Fifth Harmony, the winner of best music group and song. Ally Hernandez, from left, Normani Kordei, Dinah Jane, and Lauren Jauregui of Fifth Harmany pose with the award for choice music group in the press room at the Teen Choice Awards at the Galen Center on Sunday, Aug. 13, 2017, in Los Angeles. (Photo by Jordan Strauss/Invision/AP)

“In light of recent events, we just wanted to say to all of the young ones at home watching, no matter who you are, where you come from or what you look like, you are beautiful and you are important,” said the group’s Lauren Jauregui. “So keep spreading love and positivity.”

The prominent role for Paul was a big moment for him, too. In late July Paul departed the Disney Channel series “Bizaardvark” after reports that he was feuding with his West Hollywood, California, neighbors.

“The past few months have humbled me quite a bit. I had to be more mindful of my words and actions and how they impact others,” said Paul while accepting his own pair of awards for best YouTuber and web star. “The next step for me is to forget all the bad press, drama, negativity.”