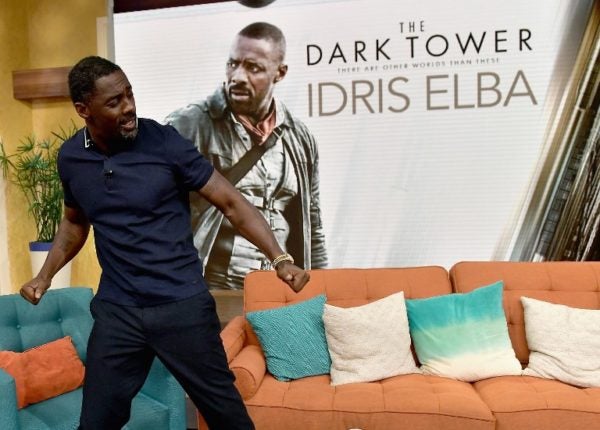 Actor Idris Elba is seen on the set of ‘Despierta America’ to promote the film ‘Dark Tower’ at Univision Studios on August 2, 2017 in Miami, Florida.  AFP

The film, based on a series of best-selling novels by horror and fantasy master Stephen King, stars Tom Taylor as a boy who finds himself in another dimension where a gunslinger (Idris Elba) helps him try to save the world from enemies including a Man in Black (Matthew McConaughey). The film garners a paltry 18 percent approval on the Rotten Tomatoes review site.

Second in the box-office race was war movie “Dunkirk,” slipping from the No. 1 spot it occupied at its opening a week earlier. The Warner Bros. film had a three-day take of $17.6 million, according to industry website Exhibitor Relations.

Starring One Direction singer Harry Styles in the retelling of the heroic 1940 evacuation of hundreds of thousands of Allied troops from a beach in northern France, “Dunkirk” has been hailed by many critics as a masterpiece.

In third spot was Sony’s “The Emoji Movie,” a computer-animated comedy based on — yes — those expressive little symbols on cell phones. With an all-star voicing cast including James Corden, Anna Faris, Maya Rudolph, Christina Aguilera and Sofia Vergara, the movie netted $12.4 million — not so bad for a film that scores a dismal 7 percent on Rotten Tomatoes.

Fourth place went to “Girls Trip” from Universal, at $11.4 million. The raunchy comedy, about the misadventures of a group of lifelong friends who travel to New Orleans for a music festival, stars Queen Latifah and Jada Pinkett Smith.

In fifth was Aviron’s thriller “Kidnap,” at $10.2 million. Halle Berry plays a mother who will do anything to get her kidnapped son back. CBB