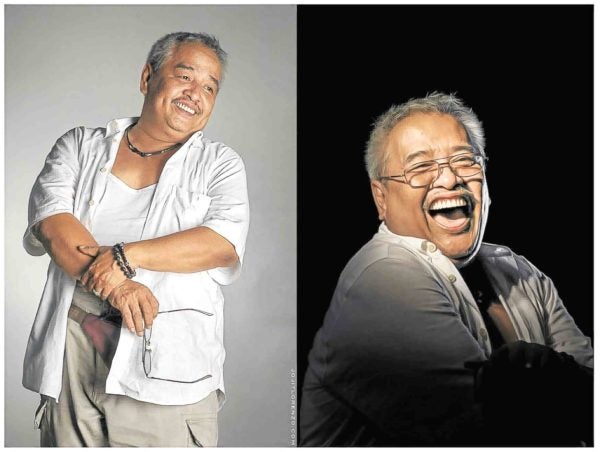 A certified box-office hit. That was how filmmaker Ellen Ongkeko-Marfil described the wake of actor-director Soxie Topacio, who had passed away after a valiant battle with small cell lung cancer last Friday.

There were so many people—colleagues from the worlds of theater, television and cinema—who wanted to show their love and pay their last respects to Topacio at St. Peters Chapel in Quezon City, Marfil told the Inquirer.

According to Marfil, she and contemporaries Ruby Ruiz, Evelyn Vargas, Emmanuel Quindo Palo, Melvin Lee and Maribel Legarda were among the new generation of actors and directors whom Topacio had trained in his four-decade stint in the Philippine Educational Theater Association (Peta).

Filmmaker Maryo J. delos Reyes recalled: “We started in Peta at the same time, in 1972. We were housemates for a long time. He was a dedicated artist… a true and honest friend, through thick and thin.”

Mel Chionglo directed Topacio as an actor in the 1994 movie, “Sibak: Midnight Dancers”: “I told him that I had picked him because of his gentle and motherly qualities. Perfect! Soxie was a joy to be with—always pleasant and funny.”

“I have lots of fond memories of Soxie,” related actor Roderick Paulate, who topbilled Topacio’s biggest success as a filmmaker, “Ded na si Lolo,” the country’s entry in the best foreign language film category of the Academy Awards in 2009.

Their friendship went a long way back, since the ’70s, when Paulate was a child actor. “When I turned 14, we did Direk Maryo’s ‘High School Circa ’65’ in 1979,” he recounted. “There was no dull moment with Soxie. We were always laughing… But we also discussed serious social issues, then we would crack jokes again.”

Paulate is grateful for the time they spent together for the Oscar campaign of “Ded na si Lolo.” “We traveled to Palm Springs, California, to attend the screenings. We really got to bond that time. He was a genuine friend.”

Actress-director Gina Alajar, who was also in the cast of “Ded na si Lolo,” remarked that Topacio never allowed himself to get affected by problems. He gave her wise counsel on how to cope with love woes. “He told me: ‘Sige, just cry it out. When you get tired of crying, you’ll fall asleep. When you wake up, you’ll be hungry. It’s impossible to cry for 24 hours!’ He’s a beautiful person with a beautiful heart.”

Superstar Nora Aunor had the chance to collaborate with Topacio in Peta’s staging of her movie classic, “Minsa’y Isang Gamu-gamo” in 1991, followed the year after by another well-received play, “DH.”

They visited seven cities in the United States and Europe, to perform “DH,” she looked back. “He was always relaxed whenever we rehearsed.”

Aunor described Topacio as a big loss to the country’s struggling theater thespians. “Marunong makisama at mabait siya sa mga artista niya (He knew how to get along with everyone and was kind to his actors.)”

Once Aunor asked him why he didn’t make more movies. “He just laughed and said he was happy doing stage plays,” Aunor said. “Noong nalaman ko na pumanaw na si Direk Soxie , nabigla at nalungkot ako (When I learned that he had died, I got shocked and felt sad).”

Topacio was tireless in teaching younger artists the craft.

“He was one of our regular lecturers at our film workshops,” reported Boots Anson-Rodrigo, head of the Movie Workers Welfare Foundation, Inc.

Filmmaker Jun Robles Lana pointed out: “He was fully committed to his passions and was always generous to share his vast knowledge to aspiring artists.”

Lana, who directed Topacio in “Bwakaw” in 2012, traveled with the late actor-director, to scout locations in Italy for unproduced movies that APT had commissioned them to write. “He was fun to be with. He never took himself seriously and made everyone feel at ease.”

Scriptwriter Rody Vera was among Soxie’s many students in the school of theater and life. “Soxie hated egotists,” Vera noted. “He was never snotty nor snobbish. He rarely exploded in anger and, [if he ever did, it was] never without a reason.”

“Soxie was one of the people who made it easier for me to confront my gayness,” Vera volunteered. “He was also quite active in supporting gay rights and welfare.”

According to niece Zarah Topacio-Navarro, the actor-director’s funeral was set yesterday at the San Juan Cemetery.