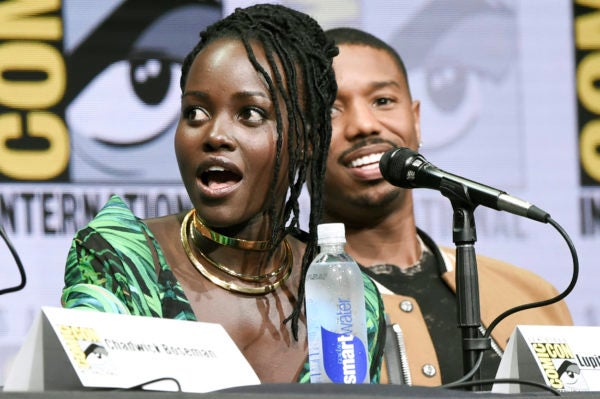 Lupita Nyong’o, left, and Michael B. Jordan attend the “Marvel” panel on day 3 of Comic-Con International on Saturday, July 22, 2017, in San Diego. AP

The clip was followed by the trailer for the film from “Creed” director Ryan Coogler and the 6,500 souls in the audience erupted into deafening cheers at the sight of T’Challa morphing into the Black Panther suit.

The film finds T’Challa returning to his home of Wakanda after the death of his father, the king.

“He’s still mourning his father’s death. It’s a transition period that gets interrupted, and he’s struggling with the type of king he wants to be,” said Boseman.

Coogler, Boseman, Nyong’o, Gurira, Serkis and more of the cast were on hand in San Diego to talk about the film, out Feb, 16, 2019.

Nyong’o described her character as a spy who goes undercover to report back to Wakanda about what is going on in the rest of the world.

“Wakanda is an isolated nation,” Nyongo said. “The world does not need to know what’s going on in Wakanda.”

Coogler said he’d always had a fondness for comic books, and found “Black Panther” at a pivotal moment.

“I grew up as black kid in the Bay Area and grew up with comic books and it didn’t matter what color the superheroes were. I read X-Men, I read Spider-Man,” Coogler said. Then he started looking for a character that looked like him and he stumbled on Black Panther.

Marvel Studios also teased its third “Thor” film, “Thor: Ragnarok ,” which has quite a different and more irreverent tone from previous installments, and hits theaters in November.

“I’ve played this character five times,” Chris Hemsworth told the audience. “Me, personally, I got a little bored and thought we’ve got to try something a little different … Push the envelope, take it to another level.”

So, they cut his hair, take his hammer away and pit him against Jeff Goldblum and Cate Blanchett. When Blanchett’s Hela, the goddess of death, invades Asgard, Thor finds himself on the run and under the control of Goldblum’s Grandmaster on Sakaar where he is pitted against the Hulk in a Gladiator tournament. In this film, the Hulk refuses to turn back into Bruce Banner, but he is learning to speak, albeit slowly.

“He has the vocabulary of a two year old,” Mark Ruffalo said.

Marvel also unveiled the “Avengers: Infinity War” footage that the studio had previously shown to audiences at the Disney fan convention, D23, and made a few announcements regarding upcoming films: Michelle Pfeiffer will play Evangeline Lilly’s character’s mom Janet van Dyne in the “Ant-Man” sequel “Ant Man and the Wasp” and “Captain Marvel,” Marvel’s first female-driven superhero movie, will be set in the 1990s.

As Marvel Studios head Kevin Feige described it: It’s so long ago that Samuel L. Jackson’s Nick Fury will have two eyes.

Travel authority not required for workers of essential establishments – DILG