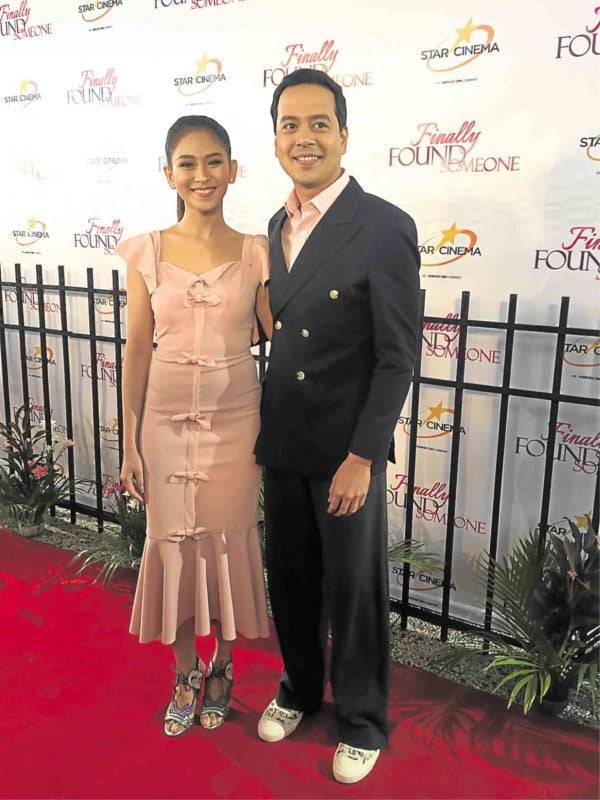 For actor John Lloyd Cruz, timing was what kept him from getting involved in a real-life relationship with onscreen partner Sarah Geronimo.

“Timing has always been an issue,” declared John Lloyd, implying that one of them would be dating someone else when the other was single. “Timing is not our friend. I have always felt this affection for her. I wonder if this would ever disappear… These days, I just observe her from afar. I’m OK with that.”

“She has this certain charm—she is well-loved, even by my own mom and aunties,” he added.

Meanwhile, Sarah, who is currently dating fellow ABS-CBN artist Matteo Guidicelli, said: “Thanks! That’s Lloydie’s role in my life—to appreciate me. For that, I’m happy.”

Sarah first starred with John Lloyd on the big screen in the box-office hit “A Very Special Love” in 2008. This was followed by the equally successful “You Changed My Life” in 2009. Their most recent, “It Takes a Man and a Woman,” was released in 2013.

They are currently promoting another collaboration titled “Finally Found Someone,” which will hit cinemas on July 26.

“It’s impossible to be able to make a film like this if we don’t feel something for each other,” John Lloyd insisted.

In trying to explain the special connection she has had with John Lloyd through the years, Sarah said: “It’s not just chemistry, it’s a gift. We are blessed to be given this kind of tandem. With it, we are able to make many people happy.”

In “Finally Found Someone,” April Esguerra (a sincere and idealistic woman whose belief in the power of true love is unwavering) meets Raffy Sandoval (a PR hotshot who masterfully crafts lies for a living).

Director Theodore Boborol observed that Sarah was able to effectively express in the film the happiness she’s now experiencing, particularly in her love life.

“She has obviously grown so much as an individual. Since she and John Lloyd made their last film four years ago, Sarah had already been through enough life experiences that made it easy for her to shoot the scenes in this movie that required her to confront her emotions. I felt that her acting has more depth now,” the director pointed out.

For her part, Sarah said that while personal experiences indeed helped improve her performance as an actress, she believed that “a portrayal will be seen as honest and real if an actor inhabits and fully embraces her character. In the times when John Lloyd and I worked together, I just believed that I was April, and he was Raffy.”

Sarah said that prior to agreeing to do “Finally Found Someone” with John Lloyd, she had already wanted to veer away from making romantic-comedy films.

“I had wanted to portray a character involved in more mature situations, but looking at this film now, I realized that it’s actually not shallow at all. It’s relevant and relatable, especially to the women of my generation,” she said.