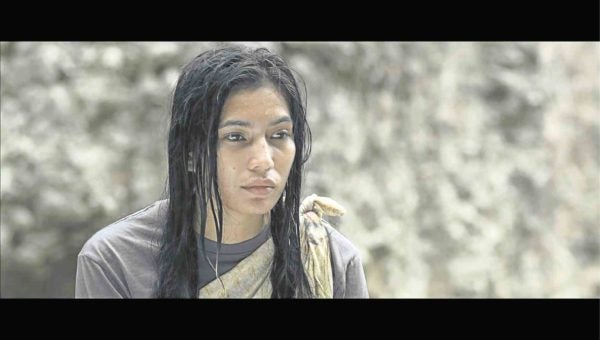 Laila Ulao in “Women of the Weeping River”

Nurse-turned-actress Laila Ulao wants to make sure that her cell phone is fully charged when she attends the Gawad Urian ceremony tonight at the ABS-CBN compound.

She hopes to take as many selfies with different stars at the awards show, where she is nominated for best actress, for her debut movie, Sheron Dayoc’s “Women of the Weeping River.”

“I hope he will be there,” she quipped. Told Lloydie was a nominee (for best supporting actor, for “Ang Babaeng Humayo”), she squealed in sheer delight.

During an earlier event, she got to cross out another stellar name on her selfie list: Cannes best actress and her fellow Urian nominee, Jaclyn Jose.

“I waited for her outside the toilet,” Laila recalled. “That was the Jaclyn Jose! Madame na madame siya! I got starstruck! She was so nice and agreed to have a photo taken with me.”

Show biz, a world of glitz and glamour, seems miles away—not just geographically, but also culturally—from Laila’s hometown of Ipil, Zamboanga Sibugay. (She was born in Jolo, Sulu, but finished college in Ipil.)

Before she was discovered by Sheron, Laila had worked as a field nurse for the nongovernment organization Pinay Kilos—which promotes reproductive health programs in the Autonomous Region in Muslim Mindanao. She has always been involved in the campaign for peace and women’s rights in southern Philippines.

A young Muslim woman, Laila curiously has fond memories of her stint in such places as Marawi, Cotabato and Basilan. “I chose volunteer work because it’s more fun compared to being stuck in the daily routine of a hospital,” she asserted. “In the communities I worked in, I got to meet new people and listen to different stories.”

She had tapped into these stories, a virtual reservoir of raw emotions, in portraying Satra, whom she described as “a strong woman.”

“I am familiar with her story. There are a lot of people like her in Zamboanga,” Laila pointed out. “Satra’s wish is for the rido [clan war] to end. She hopes to put a stop to the cycle of revenge.”

How does she envision peace flourishing in the land of her birth?

“We should stop planting seeds of hatred,” she said. According to her, when there is animosity in our hearts, revenge will take root.

Mindanao has been constantly in the news of late. After the Zamboanga siege four years ago, Marawi was hit hard this year.

She has faith that Zamboanga and Marawi will rise from these twin tragedies.

She visited Marawi a few years ago, to take part in a workshop promoting peace. “I cannot explain how I feel,” she said of the city’s current situation. “It’s difficult. So, I console myself with the fact that there are other people helping Marawi.”

Laila was raring to relocate to Dubai, where a nursing job was waiting for her, last year. Then, she won best actress at the QCinema fest and Young Critics’ Circle for “Weeping River.”

No, she didn’t take the awards as a sign to change her mind. Rather, the trophies served as two palpable, pragmatic reasons that convinced her to give acting a try. Now, her career is being handled by TBA, the same group behind “Heneral Luna.”

Sheron told the Inquirer that it was important for him to hire actors who are not only physically perfect for the part.

“They should also have the right background to connect with their characters,” he said.