‘Bourne Legacy’ to shoot in PH in January 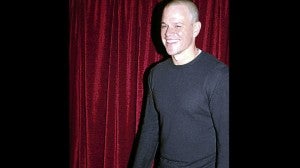 NEW YORK—The latest installment of the “Bourne” franchise is in production in Canada and next, the Philippines—but without Matt Damon in the lead role. However, Damon told us that he’s not done yet with the spy thriller series.

First, we share details of “The Bourne Legacy,” which stars Jeremy Renner, as it gets ready to shoot in the Philippines in January after it wraps up filming in Calgary, Canada this month.

Over lunch at the Loews Regency Hotel, we learned from producer Frank Marshall that The Kennedy/Marshall Company, which he founded in 1992 with his wife, producer Kathleen Kennedy, has already selected locations in the Philippines for the film.

Frank, whose producing credits include the “Indiana Jones” franchise, “The Sixth Sense,” “The Color Purple” and the “Back to the Future” trilogy, told us that a big action scene will be filmed during the five-week shoot in and out of Metro Manila, scheduled in January 2012.

He pointed out that the Philippines is not subbing for another country in the movie. 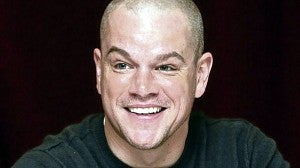 HE PLANS to return as Jason Bourne in the future, with director Paul Greengrass. RUBEN NEPALES

The main location will be an industrial plant, according to Frank, whose other films, including “The Curious Case of Benjamin Button” and “Seabiscuit,” received several awards and nominations. Frank and Kathleen’s company is also behind Steven Spielberg’s “The Adventures of Tintin: Secret of the Unicorn” and “Lincoln.”

Frank added that the “Bourne Legacy’s” two leads, Jeremy and Rachel Weisz, will fly to the Philippines for the shoot. Jeremy plays Aaron Cross, not Jason Bourne, the title character played by Matt in the earlier “Bourne” films. Aaron is a new CIA operative in the story based on Robert Ludlum’s novels.

Tony Gilroy, who wrote and directed the political drama “Michael Clayton,” is also directing the fourth film in the “Bourne” movie series, which will be released in the United States in the summer of 2012. Tony also cowrote “The Bourne Legacy” and the three previous “Bourne” films.

In an earlier interview, Jeremy talked about his experience shooting “Bourne Legacy” so far, in comparison to filming “Mission: Impossible —Ghost Protocol,” which casts him with Tom Cruise. 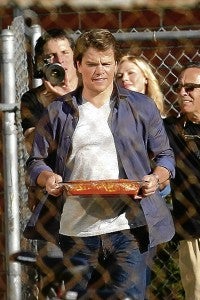 MATT Damon in “We Bought a Zoo”

“Those are completely different movies even though they’re both big franchises and big action movies,” he said. “The tone obviously is different. For me, the ‘Bourne’ experience so far has been so intimate. It’s not the big fun spectacle stunts that ‘Mission’ has … It (‘Bourne’) feels like a little independent movie because it is really intimate. The cast is small and it’s much more an ‘inside’ story. It’s not an IMAX movie.” The cast includes Edward Norton, Joan Allen, Albert Finney, Oscar Isaac and Stacy Keach.

“It’s a very visceral, sort of documentary-style movie,” he continued. “We have the same DP (director of photography) on both movies, Robert Elswit. I’m happy to work with him again.”

Matt, in a separate interview at the Loews Hotel, told us that he plans to return as Jason Bourne in the future. “I was always going to do it with Paul (Greengrass),” Matt said, referring to the director of “The Bourne Ultimatum” and “The Bourne Supremacy.”

Matt recalled that he and Paul “looked at it. At the time they needed to go, we didn’t have a story. We just felt it was too risky to just make up the story as we went along. So we took a step back but the movie that’s being made now doesn’t preclude us from making one later. As long as I have a chance to make another one with Paul, that will be great.”

He said that working on 2007’s “Bourne Ultimatum” was “a real white-knuckle experience. We don’t want to go through that again. It was just not the right way to make a film. We were lucky to pull a rabbit out of that hat.”

Matt’s head was shaved for “Elysium,” a sci-fi directed by Neill Blomkamp (“District 9”) set for release in 2013. “I just finished filming in Mexico City,” said the actor. “I have high hopes for that movie. It’s going to be great. Neill is a brilliant director.”

“Elysium” takes place in the future, but Matt clarified that “there aren’t any aliens in it. It’s about what happened to Planet Earth. There’s a dynamic involving Taurus, an orbital habitat called Elysium that is hovering over Earth. That’s probably all I can say about it.”

In the meantime, Matt appears in “We Bought a Zoo,” an adaptation of a BBC miniseries and a book of the same title written by an English journalist, Benjamin Mee, who moved with his family into a zoological park. Cameron Crowe directs the film which changes the story’s setting to the United States. Matt plays Benjamin, a widower with two kids (Colin Ford and Maggie Elizabeth Jones, a cute 7-year-old at the time of filming but has the soul of a 40-year-old).

Matt said, “‘We Bought a Zoo’ is about as different from ‘Elysium’ as you can get. ‘Elysium’ is a very hard and violent sci-fi movie while ‘Zoo’ is a family movie. As Cameron said, this is a piece of joy.”

The script for “Zoo,” Matt explained, took a lot of liberties with Benjamin Mee’s story. “But it was great. We wanted the spirit of an adventurer who buys a zoo. Benjamin came to visit the set. He was really excited about the movie, even about the different direction that we’d taken. He and his wife, Katherine, bought the zoo together. She got sick and passed away after they had bought the zoo. The movie’s quite different from his actual story. But Benjamin was excited that the movie might drive some traffic to his real zoo (Dartmoor Zoological Park) in England.”

Matt hopes to make his feature directorial debut next year. It will star him, John Krasinski and Frances McDormand. “It’s just a small movie about a salesman who goes to a small town,” he said. “It’s about how that town changes him and how he changes the town a little bit, too. I was joking that it’s going to be done for the catering budget of ‘Elysium.’ ”

After this project, he is going to do the Liberace biopic in 2012. Steven Soderbergh directs with Michael Douglas as the flamboyant pianist and Matt as his lover, Scott Thorson. “Thank God I don’t play Liberace,” he said. “Michael Douglas has all the work to do.”

According to Matt, the biopic is based on the book written by Scott titled “Behind the Candelabra: My Life With Liberace.”

Matt said he has not met Scott, but “my understanding is that he is alive and well. I’m not sure where he lives though. There are conflicting stories that he might be in the witness protection program. I’m not sure. If he wants to meet, I’d be very happy to meet him.”

Matt and his wife Luciana, married since 2005, are raising four daughters, including Alexia, Luciana’s daughter from a previous marriage. Asked how he has stayed down-to-earth after all these years, Matt quoted his friend George Clooney: “I have teams of people who do that for me.”