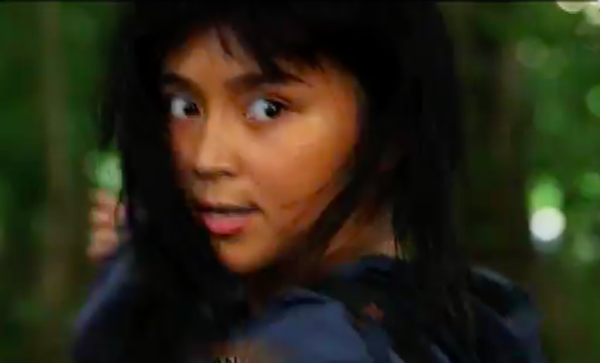 Looks like all the training she has been doing is paying off, as Kathryn Bernardo is earning positive feedback from the public for her action scenes in the TV series “La Luna Sangre”.

In the July 12 episode of the program, her character Malia got caught in the middle of the jungle and was confronted with a group of vampires. She had no choice but to fight these blood-sucking creatures using her instincts and speed. Malia was initially avoiding a possible encounter until a hiker’s life was put in danger. She helped the stranger and fought off the vampires.

Following her face-off with the vampires, she decided to change her appearance by cutting her hair short to deceive Sandrino, the leader of the vampires played by Richard Gutierrez. Malia is on a mission to penetrate the vampire camp to avenge her family.

Both Bernardo and co-star Daniel Padilla have been training hard for their action scenes. Padilla had since praised his leading lady for quickly learning the fight scene choreography. They both underwent training for arnis, balisong and Filipino martial arts.

Bernardo, together with on-screen partner Daniel Padilla are now officially ambassadors of the Cybersmile Foundation, an anti-cyberbullying non-profit organization aiming to raise awareness about online abuse to promote a more positive internet world.

They will be joining a host of influencers from all over the world, including American golfer Paige Spiranac, American girl group Fifth Harmony member Normani Kordei, American actresses Krista Allen and Katie Cassidy, among others. JB