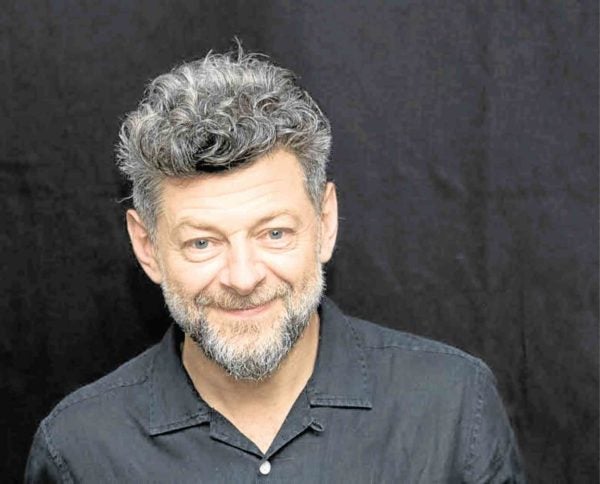 LOS ANGELES—If there’s any justice in this world, Andy Serkis should be getting major recognition for his body of work for almost two decades now. Yes, it’s performance capture, but whose voice and acting fueled Gollum in “The Lord of the Rings” and “The Hobbit” series, Caesar in the “Planet of the Apes” franchise and the title character in 2005’s “King Kong”?

Andy’s excellent performance in “War for the Planet of the Apes,” the third in the well-received series, is once more triggering discussions that his motion-capture (mo-cap) acting deserves an Oscar nomination. Andy collaborated with director Matt Reeves, who cowrote the screenplay with Mark Bomback.

In his review of “War…,” USA Today’s film critic Brian Truitt argues for Andy: “It was a shame that Serkis’ mo-cap role as Gollum in ‘The Lord of the Rings’ films didn’t snag him an Oscar nomination. But it’s truly an injustice if Serkis’ third—and best—turn as Caesar doesn’t get a serious push. While it’s probably still a long shot (no mo-cap performance has ever garnered an acting nomination), what he accomplishes here is monumental.

“Since Caesar is the only ape that talks, Serkis’ speeches give him the gravitas of a Spartacus or Ben-Hur. Close-ups capture the pure pain that’s present as he’s haunted by the ghost of Koba (and his last words, ‘Ape not kill ape’)…”

In addition, Andy is the cofounder of Imaginarium Studios, a production and performance-capture studio, which produced two films that’ll come out later this year, and “Jungle Book” (Warner Brothers’ live-action version, which he is directing), due next year. 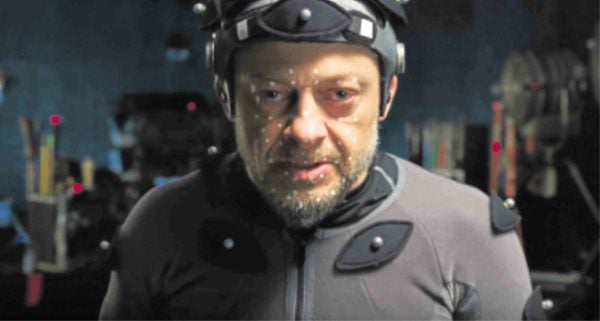 Andy Serkis in “War for the Planet of the Apes”

This movie feels almost like a biblical epic, reminding us of Moses leading his people to the Promised Land. I remember the first time sitting down with Matt and Mark, talking to me about the ambitions for this film. Matt hadn’t even written the script. We sat down in the foyer of a hotel in LA. He told me this journey that he had in his head, which was jaw-dropping.

He had so clearly plotted out that mythic structure, the twists and turns, Caesar’s conflict. Yes, it’s war for the planet of the apes, but it’s the war for Caesar’s soul. That is so apparent, and the references were exactly that—Moses, the big mythic western stories, “The Outlaw Josey Wales,” “Jimbo” and Kurosawa.

That scale of storytelling was what Matt was after. He’s achieved it in a seamless, beautiful, honest epic but, at the same time, it’s emotional. The great thing that Matt has done as a director and writer is that you don’t go, I’m rooting for the apes or the humans. You’re wondering how both are going to survive. You care for both. You hope that something positive will come out of this disastrous situation.

Has the technology gotten easier for you as an actor over these three films? The technology hasn’t changed radically. It’s the same process. What has changed—which is amazing—is that the artists who have been working on these films since “Rise of the Planet of the Apes” have become
more attuned to honoring the original actors’ performances. They’ve done it with all the ape characters and the software they’ve created.

Strangely, my son was watching “Rise” last night because the family is going to see this film. So they’re going through the other two “Apes” films. I popped my head in, and you can see the huge difference in the integrity and fidelity of the performances that the actors are giving now in the technology’s latest form.

But also, it comes from a director who fully understands acting. Matt sits with the cut that he makes of all the performances shot on the day.

Can you talk about Terry Notary and his contributions as a movement choreographer? He is a phenomenal human being, a great artist and a perfectionist. What he does on a day-to-day level is vast on this movie. He’s a master at what he does. He’s not just ape man.

From the films he works on across the board—he created all the Hobbits for the culture in all of “The Hobbit” movies, Orcs and Elves in such detail and finds the physical language. Actors adore him. He is absolutely brilliant at what he does.

What did you learn from playing Caesar? You’re always putting yourself at the starting point—OK, how do I approach this? The great thing about this character and the technology is that for me, as an actor, these things all come together in a character like Caesar. Because on the one hand, you’re entering into a character who’s an abstraction of yourself.

You are playing emotions or not playing emotions. You’re chemically tricking your body and mind into feeling things. So you’re going through something. You’re irrevocably changed by whatever character you play. It’s a huge commitment.

For both Matt and me, Caesar’s journey was a huge emotional journey. It was very dark and intense. It also happened in a year when we both suffered personal losses. That was happening right in the middle of the movie. There’s a brutality to this shoot, a great sense of darkness and foreboding.

It was a really tough shoot. We were shooting on locations in snow. It was freezing-cold Canadian winter. It was an experience I’m quite glad to be at the other side of.

Can you give an update on your Imaginarium Studios? Imaginarium is in a really interesting moment because this year, we have worked on three films. We have produced the horror film, “The Ritual.” I’ve directed a film called “Breathe,” which is a triumph of the human spirit over adversity and a beautiful love story, set in the ’50s. It’s a potent, powerful film starring Andrew Garfield and Claire Foy. It comes out in October. “Jungle Book” is continuing.

We’ve also been working with the Royal Shakespeare Company in putting performance capture in a theatrical setting for the first time. We’re working on virtual and augmented reality. There are lots of different areas where performance capture is now becoming a common tool for next-generation storytelling.