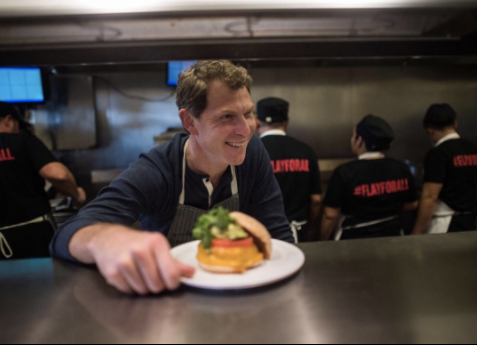 Celebrity chefs Gordon Ramsay and Bobby Flay are perhaps the two most popular figures in the culinary industry today.

Although both are considered to be on top of their profession, most fans can’t help but wonder who would prevail against the other if pitted in a good old fashioned culinary showdown.

During a recent appearance at culinary and wine event Vegas Uncork’d, Flay shared his willingness to take part in a contest against the famed tough-talking culinary genius.

“Only if it’s a Pay-Per-View event,” Flay said, according to Foodbeast. “I’ve been hoping it would happen outside of Caesar’s Palace, like the old school heavyweight fights, but that’s yet to have happened.”

The 52-year-old American chef and restaurateur also didn’t bother going through the specifics of their proposed match up, claiming that “Gordon would likely cheat anyway.”

The dream contest, meanwhile, first came to light during last year’s Vegas Uncork’d event, when Ramsay told the audience that the showdown is imminent.

Dat Dude Gordon Ramsay announced that he’s gonna do a live throwdown against Bobby Flay at the end of the year. Just wish that server hadn’t stood RIGHT in front of me lol. #vegasuncorkd #foodbeast #lasvegas #whathappensinvegasgoesonfoodbeast #gordonramsay #bobbyflay

Their supposed rivalry, however, seems to come in jest, in the form of friendly competition.

Still, a potential showdown between the two talented chefs with larger-than-life personalities would certainly attract a major audience. Khristian Ibarrola/JB