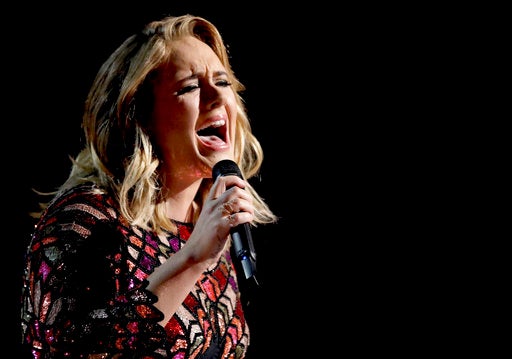 In this Feb. 12, 2017, file photo, Adele performs “Hello” at the 59th annual Grammy Awards in Los Angeles. Pop superstar Adele has hinted that her current tour for Grammy-winning album “25” will be her last. The 29-year-old included a signed, handwritten note in the program for her Wednesday, June 28, 2017, show at Wembley Stadium in London stating, “I don’t know if I’ll ever tour again and so I want my last time to be at home.”  (Photo by Matt Sayles/Invision/AP, File)

After announcing that her current tour would be her swan song, Adele scrapped off her remaining gigs in the United Kingdom.

In an announcement made via her social media accounts, the British singer profusely apologized to her fans for canceling her last two gigs, which were scheduled this weekend at London’s Wembley Stadium. She said she wrecked her vocal cords while performing in the city over the previous days.

“To say I’m heartbroken would be a complete understatement,” she wrote.”I had to push a lot harder than I normally do…it turns out I have damaged my vocal cords. On medical advice, I am simply unable to perform over the weekend.”

Since last year, Adele, 29, has completed a total of 121 gigs throughout the United States, Europe, New Zealand and Australia. Making a move that shocked fans worldwide, Adele passed on a handwritten note stating that she might not perform onstage after her current tour. “I don’t know if I’ll ever tour again and so I want my last time to be at home,” she wrote on Wednesday.

A great chanteuse of this millennium, Adele spearheaded chart-topping hits such as “Hello,” “Rolling in the Deep,” “Someone Like You” and “Set Fire to the Rain.”  Gianna Francesca Catolico /ra

Pop superstar Adele hints ’25’ tour will be her last

Adele gave Harry Styles copy of ’21’ on his 21st birthday