To my Palanggas& Claudinians i just saw this message today from this heartless person named PEGGY ENRIQUEZ BASHING MY DAUGHTER.if anyone knows this stupid person pls let me know where i can contact her.mess with my kids you messed with me! ANO BANG GINAWA NG ANAK KONG 2Years old na si Quia sayo PEGGY ENRIQUEZ?

Claudine Barretto unleashed her temper at a netizen who criticized her newly adopted daughter, Quia.

On her Instagram page on Wednesday, the actress posted screenshots of netizen Peggy Enriquez’s comments about Quia’s physical appearance. Enriquez had labeled Quia as “batang lansangan” (street child) and ugly in several comments on Barretto’s account.

Irked by Enriquez’s remarks, Barretto said on her post, “Mess with my kids [and] you [have] messed with me. Ano bang ginawa ng anak kong two years old na si Quia sa’yo (What did my two-year-old daughter do to you)?”

“If you have a problem with my child please be brave enough to say this to my face. Walang ginawa sa’yo si Quia, two years old, [tapos] iba-bash mo (Quia didn’t do anything to you, she’s two years old and you bash her),” she added, challenging Enriquez to make her account public.

Eto pa Peggy.if anyone knows how to contact this Peggy Enriquez na nagtatago na ngayon pls let me know.if u know any info about this girl pls let me know.thank u & Godbless 😀

@enriquez.peggy if u have a problem with my child pls be brave enough to say this to my face.WALANG GINAGAWA SAYO SI QUIA.2YEARS OLD I BABASH MO??

Eto pa Peggy.if anyone knows how to contact this Peggy Enriquez na nagtatago na ngayon pls let me know.if u know any info about this girl pls let me know.thank u & Godbless 😀

Barretto had more sharp words for Enriquez: “I believe you’re sick to bash a two-year-old. Out of the goodness of my heart, I hope you to take my offer to refer you to Belo [Medical Group] and have your face fixed. Don’t worry, my treat.”

Before she deactivated her account, Enriquez left an answer in one of Barretto’s post, saying that she was frankly airing her opinion. 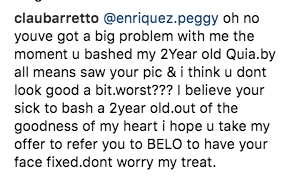