Garrie Concepcion: ‘Ate KC and I are really close’ 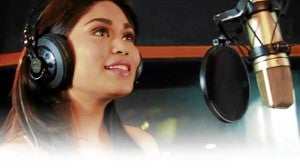 Garrie Concepcion admits she harbored resentment toward her father, actor Gabby Concepcion, for leaving her when she was a young girl.

“I was probably 10 years old then, when I already understood what happened,” she tells Inquirer Entertainment. “It’s a phase when a kid would ask so many questions. My mom would answer naman, but there are questions that only Papa can answer.”

Garrie, now 23, recalls a depressing incident when she was 6. “I was in prep (preschool) when we had a father-daughter event. It was only me and my mom because she didn’t have anybody in her life then. I remember sitting in one corner wondering why all the other kids had daddies and I didn’t.

“My mom raised me not to feel angry with anybody, but I was so bitter. I was like a kid deprived of candy. There was even a time when I refused to eat the gabi in sinigang because its name sounds like my dad’s,” quips Garrie.

She says everything changed when she turned 13 and realized that her dad “also deserves the chance to tell his side of the story.”

“He’s still my father no matter what,” says Garrie. “I thought that if I’d stay mad at him, it would just make me feel bad. I also thought that it’s time I get to know a little more about his side of the family.”

During this hourlong chat with Inquirer Entertainment, Garrie shares with us that memorable first meeting with her father and talks about her relationship with elder sister KC.

Garrie also reveals the struggles she went through when she decided to pursue a singing career. She recently released her debut album under Star Records, with “Relaks Lang Tayo” as carrier.

When did you realize you wanted to pursue singing?

I was 3 years old. I was a Disney baby. I remember I’d grab my hairbrush, stand on top of the bed, then sing. I’d also get a blanket, spread it out on the floor and pretend it’s my magic carpet, or I’d get a pillow cover, put it on my legs and pretend I’m the Little Mermaid.

Growing up, I joined the church choir. In school, instead of attending the regular music class, I took voice lessons. I really love singing.

Are you ready for show biz?

I’ve spoken to my family, especially to my mom, about this. We talked about it lengthily and discussed all the possibilities.

What were your mom’s concerns?

If you’d make her or my Papa choose, they really don’t want this for me. It’s just that in the future, I don’t want to live my life asking, “What if?” Singing is something I love doing. Now that this is given to me, why not take it?

Papa, as much as possible, doesn’t want any of his daughters to enter show biz, kaya lang we’re already here. In the end, he said, I’ll support you.

My mom said entering show biz would mean opening my life to the public. She’s scared I might not be strong enough to face the intrigues. I have such a loving, caring and supportive family so I know I’ll be okay.

You will inevitably be compared to your sister KC.

I don’t think about it that much. We have different personalities. Ate and I love each other for who we are. We’re close. It’s funny, we didn’t grow up together, but we get along really well. Iba pala talaga ang lukso ng dugo.

What do you recall about your first meeting with your Papa?

My mom had a convention to attend in the States and I went with her. I was 14 then. The meeting was unexpected. I knew of Papa, but I’d never met him or spoken to him. I only saw pictures, although I grew up knowing what happened between him and mommy.

He hugged me really tight when he saw me. Sobrang mixed emotions. I was like, “Should I hug him back?” I didn’t know if I’d cry or be happy. We went to Disneyland and Universal Studios. I also got to meet the Concepcion family in the States. Papa was nice enough to take a leave from work so that every time my mom attends the convention, he would pick me up.

Did you get to ask him all your questions during the meeting?

I was just 14. I didn’t know how to handle the situation. I felt I had to know him personally first before I could really talk with him, although there were a few questions I asked that he answered.

How’s your relationship with him now?

We try to see each other as often as we can. If he doesn’t have work and is just home, he’d text me. He would tell me if he has a shoot and wants me to accompany him.

How close are you to your mom?

We tell each other everything. She even knows about my first heartbreak. I guess it also had something to do with her having me at a young age. She was just 23 when I was born. She’s my best friend, mentor and idol.

Were you okay with your mom finding a partner other than your Papa?

It’s fine as long as I see that she’s happy. I also got along well with my stepdad. After Papa, my mom remarried and had Miguel, now 14, and Raffy, 13. Eventually, things didn’t work out for my mom and my stepdad. They got an annulment and now she’s with someone.

How do you spend quality time with mom?

We’re the exact opposite. I’m very quiet while she’s bakla in many ways. We go to the parlor and go shopping together. Sometimes we just hang out in her room and talk.

Are you currently involved with someone yourself?

No. I broke up with my first boyfriend. My ideal guy would be somebody my family approves of. He doesn’t have to be strikingly handsome, but he has to be taller than me. Faith also is very important. I’m a Catholic. I believe that with God anything is possible.