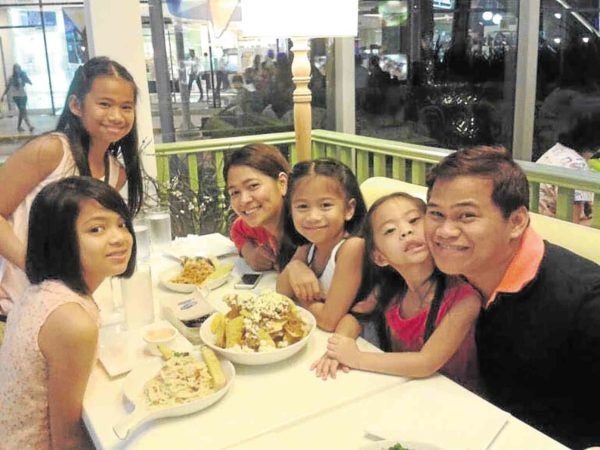 Ogie Diaz (right) makes it a point to spend quality time with his family, in spite of his hectic schedule.

At home, Ogie is a no-fuss, no-pressure kind of dad to his growing brood of five daughters with partner Sol.

“One time, my eldest started crying,” he recalled. “She said she was sorry because she landed on the 21st slot out of 34 students.”

Quick on the draw, Ogie consoled his daughter in his own inimitable way. “Congratulations, anak. At least, you were able to beat 13 of your classmates!”

Humor is precisely the best way to handle the challenges of parenting, he insisted. “Millennials ang mga ’yan,” he explained. “I have to go with the flow. If my daughter tells me that she doesn’t want to go to college, I will not force her. But I will advise her to take short courses so that she can eventually find out what she wants to do in life.”

To respect his kids’ privacy, he is reluctant to reveal their names. “I’ve also instructed them not to comment on my Facebook page, to avoid bashers. I explained to them that not everyone might understand our situation. I don’t want them to get bullied.”

His gender was never an issue to his daughters, he pointed out. “My eldest was teased by a classmate. ‘Bading ang tatay mo! (Your father is gay!)’ She answered back: ‘So what? Is your father seen on television and in the movies?’”

Fatherhood has changed his life drastically. “No more partying and late nights for me. I’m always in a hurry to go home.”

His eldest recently confided to a male friend that her dad makes it a point to spend time with the family. The boy suddenly sobbed. “It turned out he came from a broken home and seldom saw his father. He told her that she’s very lucky to have a dad who’s always there for her.”

Today, Father’s Day, Ogie will treat his family to a lunch buffet in the mall, as part of their annual tradition. “My kids always surprise me by giving me homemade cards that say: ‘You are the best dad’ or ‘You’re one of a kind.’”

According to him, the kids’ letters are more precious than acting awards.

He applies the same parenting style as talent manager to young star Liza Soberano. “I always tell Liza that I am her second dad. I actually consider her my eldest child.”

Ogie, who is a regular in the ABS-CBN sitcom, “Home Sweetie Home,” and is in the cast of Jose Javier Reyes’ latest film “Recipe for Life,” will come out with a new book soon—a compilation of his hilarious Facebook musings, entitled “Pak! Humor.”

His unique brand of comedy sealed the deal with Sol, as well.

In 2000, Ogie, who started as a movie reporter, found himself jobless, so he reinvented himself as a stand-up comedian. Sol was one of the patrons in the joint where he worked, Ohh Bar.

“She laughed the loudest at all my jokes,” he recalled. “I already had a girlfriend then, but she was persistent in wooing me.”

Ogie recalled their relationship started after he had lost a bet to her. “She dared me … that if I won against her in a game of billiards, she would stop courting me.”

Who knew she was a wiz in the sport? The billiard hall was air-conditioned, he recounted, but he was sweating bullets all night long.

“The rest, as they say, is history,” Ogie related. “Now, we have five children.”

His kids—whose ages are 15, 13, 9 and 7—are all thrilled in welcoming a new addition to the clan.

Ogie and Sol’s youngest is only 4 months old. “The baby was born premature and had to spend over four months in the hospital. We hope to take her home on Monday,” he said.

The baby is the perfect Father’s Day gift, as far as Ogie is concerned.