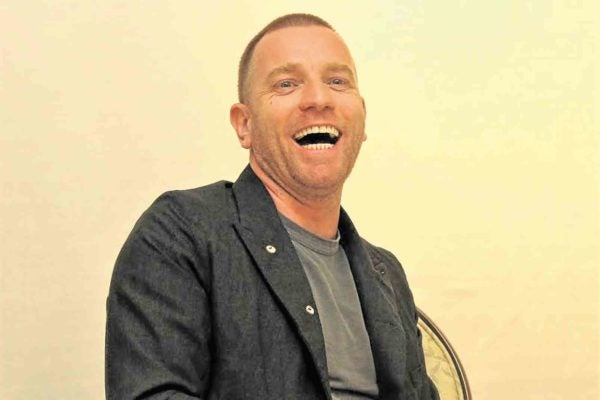 LOS ANGELES—“F*** you, Coen brothers,” Ewan McGregor jokingly dissed the directing brothers when asked what his relationship was to Ethan and Joel. The actor stars in “Fargo,” the TV series inspired by the Coens’ critically acclaimed film of the same name.

Ewan mock-complained with a laugh that the esteemed filmmaking siblings haven’t cast him in any of their movies. But he’s in the TV series set in frozen Minnesota (just like in the 1996 film that earned Oscar and Golden Globe nods) created by Noah Hawley and executive produced by, yes, Joel and Ethan.

At a meeting room in LA’s Four Seasons Hotel, the Scotland native showed up with a shaved head because he wears wigs to portray two brothers, Ray and Emmit Stussy, in the black comedy-crime drama anthology. He’s earning raves for his performance as completely different-looking siblings.

The father of four girls drank coffee as he gave answers often laced with humor.

Why do you think the film, “Fargo,” has become a classic? And what’s your relationship to the Coen brothers? I’m not very analytical about such things. I don’t know why “Fargo” landed with us the way it did. It was such a great film—something to do with simplicity, the actors the Coens chose and the way they write.

Can you talk about your journey with this project? Were you familiar with the TV series? I had not seen “Fargo” (the TV series). The story starts when I was skiing with a friend, Sasha Alexander, in Utah. She introduced me to one of the producers of FX Networks. I asked him what he thought about an idea I was considering.

He just said, “Have you watched ‘Fargo?’” I don’t watch a lot of telly. I haven’t watched “Fargo” because I thought that it was a silly idea to base a TV series on a well-loved movie.

He said, “You should have a look at the show. We are casting Season Three, and we’re looking for someone to play two brothers. They aren’t twins.” I was intrigued by that. So when I got back to Los Angeles, I watched the series.

I was like, wow, what the f*** is this (laughs)? Because it’s so grand and violent, and there are so many people in it. But I liked it very much. I was intrigued at how this guy Noah Hawley (creator) had managed to create the feeling and atmosphere of “Fargo” without any of the original characters.

So I asked to meet Noah. He let me read the pilot episode, and I loved it. As an actor, you’re always looking for good writing. I found that in this.

Talk about the physical aspects of playing those two men. They look completely different from each other and yet, you’re filming at the same time. The first thing Noah asked me to do was to put on weight. We wanted Ray to be overweight and have the receding hairline. So I put on that weight and got fat. I ate whatever and whenever I wanted. I didn’t enjoy it very much. I had just gotten to the peak of my fitness doing “Trainspotting 2,” so I was running a lot.

I got really fit, just at the point where Noah said, “You need to bulk up.” So I started getting unfit. I started eating f***ing loads of lardy things. But when you go to bed at night, it doesn’t feel great.

So we achieved Ray’s weight but then, I didn’t want Emmit to be overweight. I wanted him to feel successful, lean and handsome, but still Middle American. He couldn’t be as skinny as I was when I met Noah for the first time.

But the way it worked was having that weight with Ray, then having prosthetics to broaden my nose and get rid of a cleft on my chin. Then, I wanted weight on my neck because I wear a padded front, tits and belly for Ray. I didn’t want my body to be fat, but my face isn’t. So I have a piece around my neck.

I get into his clothes, which are soft and feel Western-y. With that weight, I felt like Ray. I’m probably closer to Ray than I am to Emmit.

Emmit is a different story. He is the capitalist, our Trump, a moneymaker. He’s a man who has spent his life trying to increase his profit margin—and that’s what drives him.

When I had all that weight for Ray, I didn’t want Emmit to have all that weight. So I had a Spanx T-shirt (laughs). You have no idea how it tickled my belly.

I felt like Trump gave me quite a lot of details for Emmit, who is thin-skinned, quick to blame other people and doesn’t like being proven wrong.

Do you have more sympathy for women now? I was the “starlet” in the makeup truck because I was in there for hours. Mary (Elizabeth Winstead) would come in, sit next to me, then leave—and I wasn’t even half done.

What did you learn from directing “American Pastoral”? It made me go straight into television because nobody went to see my film. So I went, f*** it, I’m going to make a TV show, instead (laughs). Really. I don’t think it changed me that much as an actor.
I’ve already directed and have been making films for 25 years or longer. I know instinctively how to fix things that are going wrong.

I love acting from having directed. I have been so happy back at work (acting) since then. It was 18 months of my life and a long haul. I enjoyed every minute of it.

As an actor, you’re protected from a lot of the politics, finance and bull**** that can go on in making movies. But, as a director in “American Pastoral,” I was in the middle of that world, so it made me grow up a little bit.

You mentioned being an actor for 25 years now. Looking back, is there anything that you would have done differently? That’s a funny question because I think everything I do is like the movies I’ve made. I was offered films that I turned down that people won Oscars for. But I wouldn’t change anything because everything is a stepping stone. One thing leads to the next.

After those four independent films, I decided to do “Emma” because I felt like I should be seen doing a period drama. I was dreadful in it because my heart wasn’t in it.

But still, I did that and learned my lesson. Since then, I’ve been lucky to say that I’ve never gone into a project without my heart being in it. Sometimes, my heart is in it because they’re paying me a zillion dollars (laughs). Not so much lately, but in the olden days, back in the Michael Bay days (laughs). But that’s all right, your heart can be into that for that reason, too.

But “Emma” was very successful. Why aren’t you happy with it? I was just rubbish in it. Dreadful. I don’t know what I was doing in it.

Are you raising your kids in LA with your own values? I raise kids with my and my wife’s values and not Los Angeles’ values (laughs). But I love it here. I have lived here since 2008. I have been here a long time. I feel like I am home when I come back to LA.

I got grief from someone on Instagram or Twitter once because I wrote that I was going home to LA. He gave me s*** about my roots. I replied saying, all right, let me rephrase that. I am going back to where my wife, children and dog live (laughs). Which part of that doesn’t sound like home to you (laughs)?