Season’s most inspiring series wraps up its storytelling 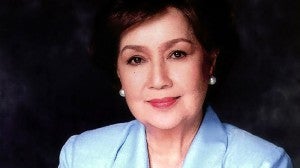 After its 100 titular telecasting days, “100 Days To Heaven” finally wrapped up its storytelling with a big bang in terms of guest star value — no less than Susan Roces and Vilma Santos figured in its concluding episodes.

Susan’s role was better motivated as an acting showcase, because she played the mother whom Coney Reyes had a tough time forgiving. Expectedly, Roces delivered a stellar performance, but its authentically emotional and visceral impact was somewhat blunted by the fact that the writing of her scenes was so mannered and extended. She was given so many verbose “arias” to intone that believability and ongoing plot development took a back seat to the overly arty  proceedings.

Vilma’s guest appearance was even less choice. Instead of being given a character who was significantly involved in the story’s central conflict, the Star for all Seasons was unreasonably assigned to play the female version of Noel Trinidad’s “keeper of the Gates of Heaven” persona.

So, all Vilma could do was to expressively and feelingly talk about the story’s central themes of forgiveness and being responsible for one’s actions — which she did, no sweat at all. But we would think that a star of her stature would deserve more substantial and dramatically engaged treatment than that.

We understand that major stars like Roces and Santos are needed by a concluding show like “100 Days” to dynamically end it on a dramatic and thematic high point. But senior stars should be given correspondingly major things to do, or the “underuse” of their proven talent is unfortunately revealed.

The show’s final chapter was also encumbered by too many melodramatic twists and turns in terms of plot and character development, so it ended up being too messy for the series’ artistic purposes. In addition, the story’s protagonists had to bid adieu, too, to many key supporting characters, who each had to be given their moment, and this further stretched and distended the series’ denouement.

All told, however, we can state that “100 Days to Heaven” was this year’s most thematically affecting and inspiring show. Its central message about the importance of forgiveness and  the consequent need for all of us to be responsible for our actions is definitely a key lesson to impart and learn—especially today, when some people have become so amoral and hard-hearted.

The series was also a personal success for lead “coplayers” Coney Reyes and Xyriel Manabat. Admittedly, there were times when, in their coplaying of the “maxi” and “mini” personas of the same character, Ana Manalastas, they kind of upstaged one another or stole each other’s thunder. Eventually, however, the production sorted the problem out in a mutually acceptable way, so the “character-sharing” gambit worked.

“100 Days” may not have ended up as big an “inspirational” hit as “May Bukas Pa” was some seasons ago, but it did well enough on its own terms. Clearly, there’s room, and extensive viewership, for more drama, comedy or “dramedy” series that teach without preaching and motivate viewers to find the goodness in other people, consequently discovering the best in themselves, as well. When comes such another? Will it be “Ikaw ay Pag-ibig”? Panoorin.