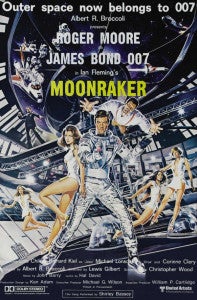 British actor Roger Moore played James Bond in a record seven films, more than any other man to date.

He made the role truly his own by using an ironically raised eyebrow, well-timed to go with deadpan quips he delivered with a slight smirk.

Moore once said he had nothing in common with “that cold-blooded killer type,” preferring instead to “play (the role) mostly for laughs.”

Here are five of Moore’s best quotes as James Bond:

Lazar: “Mr. Bond, bullets do not kill. It is the finger that pulls the trigger.”

Bond: (holding rifle) “Exactly. I am now aiming precisely at your groin. So speak or forever hold your piece.”

(from “The Man with the Golden Gun”)

Bond: “Miss Anders… I didn’t recognize you with your clothes on.”

(from “The Man with the Golden Gun”)

Bond: (shoots Drax in the heart with a hidden gun) “Heartbroken Mr. Drax.”

Bond: “Allow me.” (opens space station door and shoves Drax into an air lock) “Take a giant step for mankind.”

Solitaire: “Is there time before we leave for lesson number 3?”

Bond: “Of course. There’s no sense going out half-cocked.”

Survival of the fittest

Khan: “You have a nasty habit of surviving.”

Bond: “You know what they say about the fittest.”