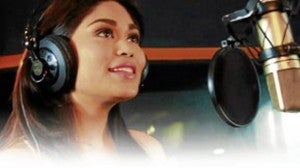 This takes place without Garie knowing that her Ate KC would do the most talked about tell-all interview with TV host Boy Abunda Sunday on ABS-CBN’s “The Buzz.”

“I feel for my sister. I’m hurt too because of what she’s going through. But I know she’s a strong woman,” she said Tuesday in an interview with select members of the entertainment press. “We had an exchange of SMS but we haven’t talked about it in details. I think we won’t go into that anymore.”

KC is still in Japan for a series of shows with other ABS-CBN talents.

Asked about her relationship with her very famous sister, Garie said, “KC has always been a generous ‘Ate’ to me. Recently, she gave me shades and other gifts. Ever since, I’ve loved the fact that I have an older sister.”

Over the years, she’s always been aware that she has a famous sister and father. She and KC only met during the wake of their grandfather, Rollie Concepcion, in 2008. Garie recalled it was the most memorable moment of her life. Catching up on the lost years, Garie and KC never lost contact. “We’d hang out every time we have time.”

She added she’s also in touch with their younger half-sister, 16-year-old Chloe, via Facebook. “She was the one who added me up. She’s also musically inclined. I think she plays guitar or piano.” Chloe is Gabby’s daughter with former Vogue magazine editor turned actress Jenny Sequia.

“They’re both based in Sweden so it’s hard to meet up,” Garie said.

Singing has always been Garie’s passion. At the age of three, as her mother told her, she was already singing Disney tunes. She learned by merely listening to the radio.  “So having an album is truly a dream come true for me.”

Garie’s reason why she’s entering show biz only now is simple. Her mother decided she has to live her younger years like a normal teenager. “I’ve never left the Philippines. I grew up here,” she said.

She finished a Bachelor of Science in Hotel and Restaurant Institutional Management major in Tourism Management from De La Salle University-Benilde.

Apart from singing, she said she likes to try hosting. Acting, she emphasized, is still too far-fetched.  Of course, she expects the comparison with the already established KC, who everyone describes a show-biz royalty.

Garie, judging from the way she talks, laughs and sings actually sounds like KC. The influence is already there. Or could it be the Concepcion genes, right there in her vocal cords?

She recalled an incident. “One time, I called up dad (Gabby). We’ve talked about several topics already when he paused and asked me, ‘Wait, which daughter I am talking to now?’”

So far, KC has two best-selling albums titled “Cassandra” and “KC”.  With the undeniable similarity of their voices, it is hoped Garie’s debut album won’t be attributed to her heartbroken sister. Or at least in the future, she could name her next album with her own name, “Garie” or “Garie’s”.

Discerning listeners and fans out there will be the judge.

Incidentally, in the album’s accompanying statement that was written way before KC’s tearful confession on national TV, the song is described Garie’s favorite track because “it speaks about how one should see life and handle things in any given situation. One must learn how to relax, surrender and think that everything will be OK one day.”

Read Next
Positive changes for Mutya ng Pilipinas queens
EDITORS' PICK
Metro Manila’s daily COVID-19 growth rate drops to 2% — Octa Research
Over 3 Million worth of prizes to be won at Smart Padala’s SENDali Manalo Promo!
SMDC’s Bloom Residences: A master planned community that cares for your health and wellness
What to expect as Metro Manila starts ‘no vaccination, no ride’ policy on Monday
COVID-19 cases in PH pass 3.2 million mark with 37,154 new cases — DOH
Upsilon, Unilever give ‘real talk’ on climate change crisis
MOST READ
IATF protocols now apply to travelers who arrived on or before Jan. 13
‘Not my loss’: Did Kris Aquino just comment on her breakup with Mel Sarmiento?
Thailand records first Omicron death
Tito, Vic and Joey still not quitting, breaking trends as they celebrate 50th year in the biz
Don't miss out on the latest news and information.