LONDON, United Kingdom — British police said early Tuesday there were “a number of confirmed fatalities” after reports of at least one explosion during a concert of American pop singer Ariana Grande in the city of Manchester.

A fleet of ambulances was seen rushing to the Manchester Arena venue after the late Monday incident and police said people should avoid the area. Bomb disposal teams followed soon after.

The deaths followed television footage of people leaving the arena, which had been hosting a concert by the American singer Ariana Grande, in a state of alarm and distress.

The first unconfirmed reports of an explosion emerged shortly after 2145 GMT. 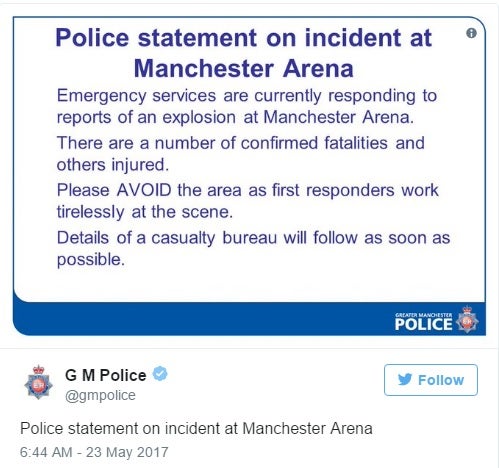 The statement issued by Greater Manchester Police that confirmed the deaths did not comment on any possible cause for the apparent explosion.

“Please avoid the area as first responders work tirelessly at the scene,” it said, noting that details of a telephone number for concerned families to call would follow.

There had been reports of a loud bang being heard near the end of the concert, causing people to rush for the exits.

Isabel Hodgins, who had been attending the concert, told Sky News: “Everybody was panicking, there was pushing up the stairs.

“The corridor was full, it smelled of burning, there was quite a lot of smoke as we were leaving. Armed police stand guard at Manchester Arena after reports of an explosion at the venue during an Ariana Grande gig in Manchester, England, Monday, May 22, 2017. Police say there are “a number of fatalities” at the venue in northern England. AP

‘Lucky to have gotten away’

“It’s just shocking and we just feel very shaken up. We’re just lucky to have gotten away safely.”

Several media outlets reported that there had been two explosions from within the 21,000 capacity venue.

Robert Tempkin, 22, from Middlesbrough, told the BBC: “Everyone was screaming and running, there were coats and people’s phones on the floor. People just dropped everything.

“Some people were screaming they’d seen blood but other people were saying it was balloons busting or a speaker had been popped.

“There were lots of ambulances. I saw somebody being treated. I couldn’t tell what had happened to him.”

Suzy Mitchell, whose flat is opposite the venue said: “(I) just heard a huge bang from my bed, came out to the front of my apartment and everyone was running away in big crowds.”

Train services to and from Manchester Victoria Station — located under the Arena — had been cancelled.

British Transport Police said in a statement: “Officers are at Manchester Arena following reports of an explosion within the foyer area of the stadium at 10.30pm this evening.

“Emergency services are at the scene and we are working to establish more information regarding the explosion and will provide further updates as soon as possible.”

The incident caused transport chaos, with traffic jams outside the venue.

“Emergency services are dealing with an incident near Manchester Victoria, resulting in all lines being closed,” operator Northern Railway wrote on its website. CBB

Read Next
‘Third Golden Age’ of PH cinema showcase at MoMA
EDITORS' PICK
Metro Manila’s daily COVID-19 growth rate drops to 2% — Octa Research
Over 3 Million worth of prizes to be won at Smart Padala’s SENDali Manalo Promo!
SMDC’s Bloom Residences: A master planned community that cares for your health and wellness
What to expect as Metro Manila starts ‘no vaccination, no ride’ policy on Monday
COVID-19 cases in PH pass 3.2 million mark with 37,154 new cases — DOH
Upsilon, Unilever give ‘real talk’ on climate change crisis
MOST READ
IATF protocols now apply to travelers who arrived on or before Jan. 13
‘Not my loss’: Did Kris Aquino just comment on her breakup with Mel Sarmiento?
Thailand records first Omicron death
Tito, Vic and Joey still not quitting, breaking trends as they celebrate 50th year in the biz
Don't miss out on the latest news and information.