Screen totems for all viewing seasons 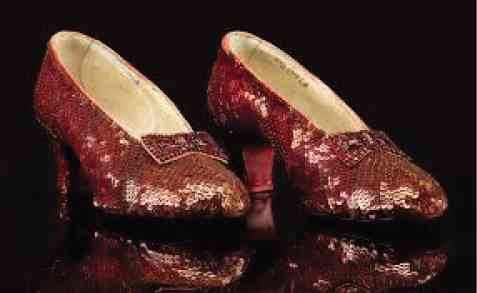 Through the years and decades, certain film productions have gone beyond seasonal popularity and significance to eventually become cinematic totems for the ages.

They have done so through sheer dint and glint of stellar portrayals that have hit viewers where they live and breathe, or due to symbolic objects that have acquired even greater power to affect and move viewers through the years.

For instance, a number of shoes featured in movies have achieved iconic status.

They include the magical Ruby Slippers worn by Dorothy (Judy Garland) in the classic film musical, “The Wizard of Oz.” The crimson footwear became so famous that they became the most treasured and valuable memorabilia in film history.

There were actually four pairs of the Ruby Slippers used in the course of shooting the film, and each of them has fetched top prices in periodic auctions. The latest was in 2011, when Debbie Reynolds sold the pair she owned for a whopping $510,000!

Judy Garland in costume for “The Wizard of Oz”

Other iconic footwear identified with exceptional films: The ballet shoes worn by Moira Shearer in the 1948 British dance drama, “The Red Shoes.”

The delicate glass slippers that led the questing prince to the mysterious beauty he danced and fell rapturously in love with in “Cinderella.”

Also laden with special meaning and mnemonic significance is the child’s sled in “Citizen Kane,” which initially mystified viewers with the word emblazoned on it—“Rosebud.”

The word became so famous that it ended up representing the “key” to a person’s character and essence that ultimately “defines” him.

Other screen objects or details that have achieved iconic status include superhero emblems like the letter “S” in “Superman,” the bat image in “Batman,” etc.

From “E.T. the Extra-Terrestrial” comes the symbolic and magical image of the silhouetted bicycles “flying” over the moon—plus the alternative “signature” image of ET’s finger making a special connection with a human child, a clever takeoff on, of all things, Michaelangelo’s mural at the Sistine Chapel!

From “Jaws” came the indelible image of the monster shark in the film—which, incidentally, was so fearsomely and persuasively effective that it saved many lives by discouraging people from swimming in shark-infested waters.

For its part, Stanley Kubrick’s “2001: A Space Odyssey” became celebrated for its “Dawn of Man” sequence that showed a caveman’s club, a length of bone, and other objects sequentially morphing into futuristic space-age technology!