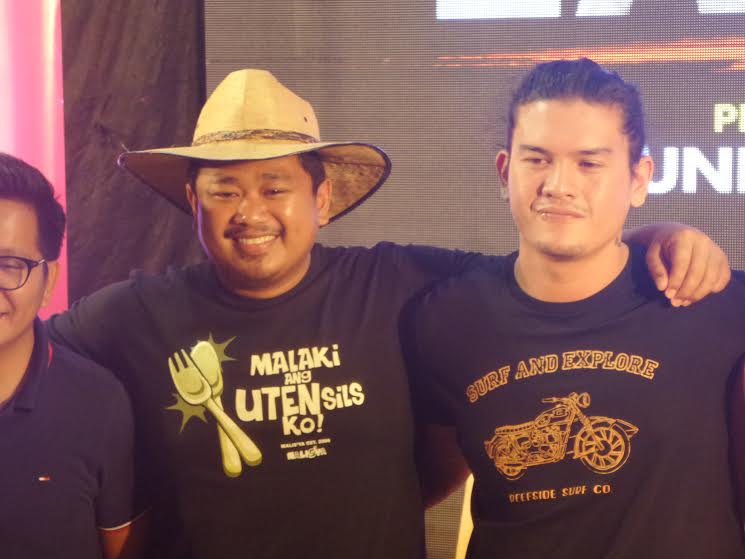 Baste Duterte and Bogart The Explorer smile as they launch TV5’s newest travel reality show, Lakbai, on May 10, 2017 at the Bonifacio Global City.  Lakbai will premier on May 21, nighttime. (PHOTO BY ARMIN ADINA / INQUIRER)

The 29-year-old bachelor, youngest son of President Duterte, will be featured in an eight-part “adventure-travel-reality” TV show called “Lakbai” on TV5.

“Lakbai” is a condensed take on the Visayan phrase “lakaw ta, bai” or “let’s go, friend.” It is also a play on the Filipino word “lakbay” which means “to travel.”

Baste confessed that show biz denizens did not have a hard time luring him in. “They didn’t convince me. Desisyon ko lang ito. Sayang din naman iyong suweldo. Iyon lang naman iyon (This is my decision.  It would be a waste of money if I passed on the chance.  That’s all there is to it),” Duterte shared.

“If this doesn’t work out, puwede naman akong umuwi sa Davao (I’ll go back home to Davao),” he added.

TV5 Head of Programming Mell Yazon-Tolentino told the Philippine Daily Inquirer at the sidelines of the launch that the station approached Duterte for a TV project, and arrived at the reality format to convince the presidential son to give it a shot.

“It took us several months of negotiations,” the TV executive added.

“There’s a close collaboration with Baste. You will see in this show a different side of him,” Toelntino shared.

For his first venture into show business, Duterte asked TV5 to include some of his friends, because “I’m camera shy.” 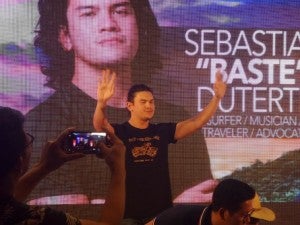 Baste Duterte waves to fans and photographers during the May 10, 2017 launch of his TV travel reality show, Lakbai, on TV5. Lakbai will premier on May 21, 2017, nighttime. (PHOTO BY ARMIN ADINA / INQUIRER)

Making Duterte’s first foray into TV more comfortable for him are some of his closest friends — lawyer Alexis Lumbatan, S’Boi Malicay and Andrei Apostol. A special guest will also appear in each episode.

Completing the gang is internet star Bogart the Explorer, also a Davaoeño.

“You’ve seen me being funny in my travel vidoes. But in this show, these guys are the funny ones. They’re hilarious. You’ll love them,” Bogart said.

“I’ve done a solo travel show, and I can tell you this is 100 times more fun talaga,” he shared.

Tolentino added: “[Baste Duterte] will show us places we have never seen before. The show is real, comfortable, easy to relate to. Just like your own barkada trip, you feel happy after watching this show.”

The show, which will air every Sunday night after the Philippine Basketball Association games, runs for an hour per episode, and will cover two to three places per installment.

Among the places it has visited are the city of Mati in Davao Oriental, the city of Dumaguete in Negros Oriental,  and the provinces of Bukidnon and Siquijor. Tonlentino said they would shoot one more episode.

Duterte earlier brushed closely into show business through his involvement with sexy star Ellen Adarna, who engaged in an online word war with his son’s mother, model Kate Necesario.

But as far as acting is concerned, Duterte is closing his doors.

“Wala talaga akong talent sa pag-acting. Ito kasi travel show, reality pa. Wala na akong babaguhin. Bayaran lang ako (I don’t have talent for acting.  This is a travel show, what’s more it’s a reality show.  I don’t have to change anything about myself.  I’m just gonna get paid for this),” Duterte said.

“Lakbai” premieres on May 21, after the PBA match between Ginebra and San Miguel.  SFM