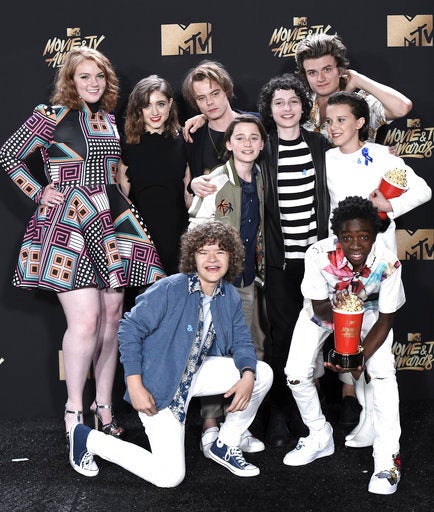 Shannon Purser, from background left, Natalia Dyer, Charlie Heaton, Noah Schnapp, Finn Wolfhard, Joe Keery, Millie Bobby Brown and from foreground left, Gaten Matarazzo and Caleb McLaughlin, winners of the award for show of the year for “Stranger Things” pose in the press room at the MTV Movie and TV Awards at the Shrine Auditorium on Sunday, May 7, 2017, in Los Angeles. (Photo by Richard Shotwell/Invision/AP)

For this, the 26th edition of what was formerly known as the MTV Movie Awards, TV was added to the mix. “Stranger Things” was decreed the Show of the Year, and its cast member, Millie Bobby Brown, was named Best Actor in a Show.

“Beauty and the Beast” was the Movie of the Year, with its star, Emma Watson, the Best Actor in a Movie.

But the awards had another trick up its sleeve, introducing a policy of breaking down gender barriers, as men and women competed jointly in the acting categories.

The policy was put into practice at the top of the show by presenter Asia Kate Dillion, who proudly noted she has been able to break down gender barriers as “the first openly non-binary actor to play an openly non-binary actor on a major TV show,” Showtime’s drama series “Billions.” (A non-binary person is someone who doesn’t identify with either gender.) Then she presented the award to Watson.

“Acting is about the ability to put yourself in someone else’s shoes, and that doesn’t need to be separated into two different categories,” Watson said in receiving her trophy,

Despite glowering skies and dime-size hailstones, MTV was heralding the start of the summer viewing season with its annual shindig. The red carpet outside Los Angeles’ Shrine Auditorium became a swamp as luminaries made their water-logged arrival for the shindig. But inside, it was dry (except for flowing cocktails among audience members) as Adam Devine hosted the proceedings.

Tongue-in-cheek, Devine described himself as a progressive personality fully equal to the night’s high-minded theme.

As the caption “Adam Gets It” flashed on the screen, Devine declared, “I love Hugh Jackman. But I call him Hugh Jack-PERSON.”

And turning to “Beauty and the Beast,” he said, “I call it ‘Multidimensional woman with her own dynamic traits, and the beast.’ ”

The show maintained its traditional irreverence with awards recognizing the best duo (Jackman and Dafne Keen of the film “Logan”), best villain (Jeffrey Dean Morgan, “The Walking Dead”), best tearjerker (hit TV drama “This Is Us”), and best kiss (Ashton Sanders and Jharrel Jerone of “Moonlight”).

That last award was presented by co-stars of the film smash “Get Out”: a very blond Allison Williams in shimmering miniskirt, alongside a nervous-looking Lil Rey Howery.

“Are you scared of me?” Williams asked him.

“Ever since the movie came out,” said Williams, “for the last couple of months — ”

“— Black dudes don’t mess with you,” said Howery, whose character in the film has good reason to be scared of hers.

A new award, Best Fight Against the System, went to the film “Hidden Figures,” which tells the story of a team of African-American women mathematicians who served a vital role at NASA during the space program’s early years.

The mission of the filmmakers, said one of its stars, Taraji P. Henson, was to dispel a certain deep-seated social myth “so another young girl wouldn’t grow up thinking that her mind wasn’t capable of grasping math and science.”

The cast of the “Fast and Furious” franchise received the Generation Award, accepted by Vin Diesel, who thanked a generation of fans “willing to accept this multicultural franchise, where it didn’t matter what color your skin was or what country you are from — when you’re family, you’re family.”

“There is one person I aspire to be every single day,” he said, “and that is my mom: a powerful, strong black woman who never listened when people told her she couldn’t be more.”

Then, among his thanks, he voiced gratitude to President Donald Trump “for the comedy.”

Even one of the night’s biggest awards couldn’t escape a bit of mischief-making. Presenting Movie of the Year, Amy Schumer and Goldie Hawn comically bobbled the title (a la the Oscars), first announcing “La La Light,” then “Moonland.” Then they got it right: “Beauty and the Beast.”