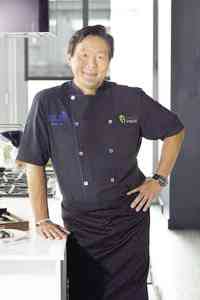 Frankly speaking, there are too many TV shows about cooking and eating on the tube, for the simple reason that they are relatively economical to bankroll and produce. All you need is a good “celebrity” chef, a well-equipped and well-stocked kitchen—and you’re good to go.

Trouble is, many cooking programs have little to distinguish themselves from the rest of the competition, so they end up a messy blur that’s hard to “digest.”

That’s why when a different kind of cooking show does hit the TV screen, we welcome it with extra relish and appreciation.

One such program that hit our sweet spot last month was “Unichef,” a unique compilation of cooks and the advocacies they have pushed and popularized.

The first chef featured and extolled on the show we watched was the now-iconic Ming Tsai.

For decades now, he’s popularized and updated Chinese cuisine for a now-enlightened and discerning global audience, to great acclaim.

This year, however, he has moved up a higher level, and used his exceptional cooking skills, and the fame and influence they’ve brought him, to promote greater awareness of the big problem of hunger in the United States.

That sounds like a contradiction in terms, since the United States is known to be the land of milk and honey—and fast and “fat” food!

Truth to tell, however, in a number of big cities, millions of Americans go hungry every day—so, Ming Tsai has been supporting organizations that have made it their mission to feed all those hungry stomachs.

With the help of big supermarket chains and restaurants, they turn vegetables, breads and meats that are no longer deemed to be in prime condition into nutritious and delicious meals.

To raise funds for these advocacies, Ming and other chefs cook for well-heeled patrons or conduct cooking workshops, and the money they make is used to provide even more meals for the desperately hungry.

After Ming Tsai, the show focused on other chef-advocates like Donatella Arpaia and Sandra Lee, who have similarly cooked and raised funds to feed the hungry masses in many big cities in the United States.

They also promoted a special advocacy for feeding and healing sick children, and some of their recipients and beneficiaries were featured in the program, to great, inspirational impact.

It was further revealed that the hunger advocates have come out with a book of recipes from the stellar likes of Mario Batali, Giada De Laurentiis and Curtis Stone, with book sales also going to the “Unichef” and Unicef feeding programs.

It’s inspiring to see culinary icons using their fame and even their fortune to solve
a heretofore unacknowledged and unappreciated problem.

Food for the body and the soul—that’s the unique “Unichef” cooking, feeding and healing viewing experience.

Read Next
Love Knots, May 8, 2017
EDITORS' PICK
Duterte meets with Cayetano, Velasco amid speakership issue
Feud is over: Velasco next Speaker on Oct. 14
Water remains our saving grace right now
House to probe Facebook takedown of gov’t accounts
Get 80% OFF Ignite 2020 Cyber Tickets starting 28 September
Smart poised to turn PH into ‘Smart 5G country’ with nationwide rollout
MOST READ
Velasco to take over as Speaker on Oct. 14
Duterte will ask Congress to abolish PhilHealth
Duterte meets with Cayetano, Velasco amid speakership issue
AMLC investigator says De Lima not involved in Bilibid drug trade
Don't miss out on the latest news and information.