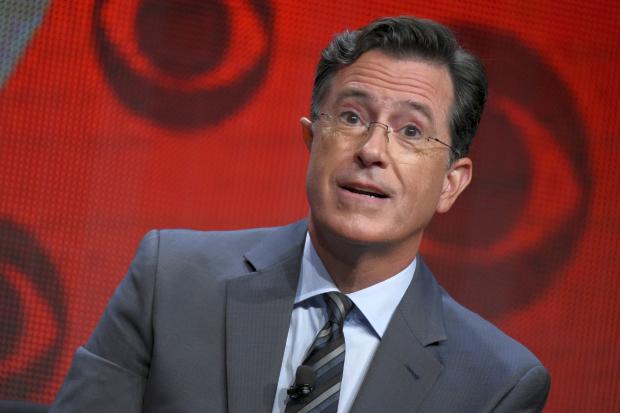 In this photo, taken Aug. 10, 2015, Stephen Colbert participates in “The Late Show with Stephen Colbert” segment of the CBS Summer TCA Tour in Beverly Hills, California. Colbert says he has no regrets about insulting President Donald Trump in a monologue that included a crude sexual reference and prompted calls to fire him and boycott “Late Show” advertisers. In his Wednesday, May 3, 2017, monologue, Colbert says he would change “a few words that were cruder than they needed to be” but he’d still do it again. (Photo by RICHARD SHOTWELL / Invision/AP)

LOS ANGELES — Stephen Colbert says he has no regrets about a monologue that included a crude sexual reference on the relationship between the presidents of the United States and Russia and has since prompted calls to fire him and boycott “Late Show” advertisers.

“He, I believe, can take care of himself,” Colbert said at a Wednesday taping of his CBS late-night show. “I have jokes; he has the launch codes. So, it’s a fair fight.”

He also made a sexual reference to the male anatomy, saying of Donald Trump: “The only thing your mouth is good for is being Vladimir Putin’s c— holster.”

That raised the hackles of conservatives and Trump supporters, who accused Colbert of obscenity and making a homophobic remark that would have gotten right-wing pundits canned.

Colbert joked about the backlash in the opening moments of the Wednesday show. According to a CBS transcript mentioned in the Washington Post, the comedian told the audience: “Welcome to ’The Late Show.’ I’m your host, Stephen Colbert. Still? I am still the host? I’m still the host!!”

Colbert said he was upset at Trump for insulting a friend, “Face the Nation” host John Dickerson. Trump referred to that show as “Deface the Nation” and later walked out on Dickerson during a weekend interview.

Colbert said he didn’t regret making “a few choice insults” but acknowledged he may have gone a bit too far and also indirectly addressed the homophobic accusation.

“So while I would do it again, I would change a few words that were cruder than they needed to be,” he concluded. “I’m not going to repeat the phrase, but I just want to say for the record, life is short, and anyone who expresses their love for another person, in their own way, is to me, an American hero.