Elisabeth Moss talks about her best role since ‘Mad Men’ 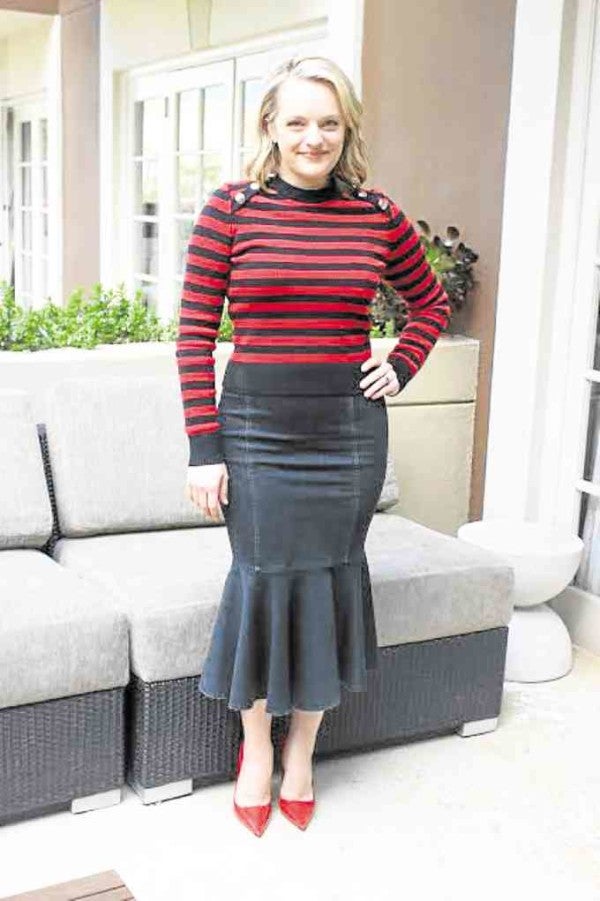 LOS ANGELES—Elisabeth Moss recently talked about “The Handmaid’s Tale,” which we think is her best role yet since “Mad Men.” In an interview in LA, Elisabeth also chatted about how relevant “The Handmaid’s Tale” is, Margaret Atwood (who wrote the novel source in the ’80s), how “Mad Men” impacted her life, and how she keeps in touch with the cast from that award-winning series.

The former child actress, wearing a red-and-black striped blouse and skirt by Michael Kors, is winning raves for her performance in Hulu’s 10-part series adaptation (directed by Bruce Miller) of Margaret’s acclaimed story.

Set in the near future, the dystopian novel has been adapted in various forms: film, opera, play, ballet, radio and even as a one-woman stage show.

In the totalitarian society of Gilead, formerly part of the US, Elisabeth’s Offred is one of the last surviving fertile women. Amid this world of a dictatorship, environmental disasters and plunging birthrate, Offred belongs to the household of The Commander (Joseph Fiennes), where she and other women are forced into sexual servitude in an effort to repopulate a devastated Earth.

The actress, who also shines as Robin in Jane Campion and Gerard Lee’s Sundance Channel series, “Top of the Lake,” is basking in TV’s second Golden Age and its significant roles for women.

She explained what attracted her to roles like Peggy in “Mad Men” and the characters in her two current shows. “For me, Robin in ‘Top of the Lake’ is incredibly complicated. She makes tremendous mistakes and is hugely flawed. She’s very strong. Human beings, not just women, are complicated, have good and bad sides, and can be vulnerable. That’s what attracts me to Robin.

“The same with Offred—she’s an accidental heroine. It was very important for me to play her as a person, not as the heroine who’s going to save the day.”

Just how pertinent is “The Handmaid’s Tale”? The monologue of Offred, as she wears the handmaid’s uniform of white bonnet and long red dress, is unnervingly familiar: “That is how we let it happen … When they slaughtered Congress, we didn’t wake up. When they blamed terrorists and suspended the Constitution, we didn’t wake up then, either. They said it would be temporary. Nothing changes instantaneously.”

This show is so timely. It couldn’t have come at a more relevant time. When I signed on in April last year, it was extremely relevant to me even then. Margaret Atwood says  it best when she says that everything she put into that book was either happening or had already happened.

It’s very much based on reality—the crimes, human rights violations. Now, there’s a certain amount of political awareness that’s happening in our own country, which lends to more relevance.

I felt that the book has been relevant for 30 years. It has a great message, no matter which side of the line you stand on politically.

What kind of research did you do? The book was the main research tool. I talked to Margaret about why she wrote the book, how it started, its relevance and themes. There’s not a whole lot further that you have to look as far as the character goes. It’s all in the book.

I talked to Bruce (Miller, showrunner) a lot about that world, how we got there and how Gilead (the story’s dictatorship republic setting) was established.

When you talked to Margaret, what did she say inspired her to write this book in the ’80s?

She told me that she’s very much into history. She’s very smart in that department. It’s very much taken from the puritanical times in America, the Salem witch trials and all that.

But she also talked about the idea of something that happens in the show and the book which is, how you would actually strip women of their rights. The way that it’s done is to shut down the bank accounts. It was one of the starting points for her.

What are your thoughts as your character deals with moments in the show that have parallels in the world we live in today? I asked her that question. Like, so what can we do to protect ourselves? Her answer applies to anyone—keep your eyes on the Constitution, be aware of the issues on a congressional level. Arm yourself with information. Vote.

Be aware of who the people in your state are and what they’re supporting—because that’s where it starts.

Do you know what Margaret’s reaction is to the show? I can’t speak for her, but I do know that she’s been very happy with everything. She’s quite used to this piece being adapted. She’s really supportive of it.

In what ways did “Mad Men” impact your life and career? I feel like any actress can speak of the fact that when you get on something that is successful, the best way that it opens doors is that people consider you for a part. And you get more things offered and have to audition less.

Do you keep in touch with the “Mad Men” cast? The cast has a text chain that erupts every once in a while. You’ll wake up, and there are 75 texts on your phone. That’s the main way we’ve kept in touch. Everyone’s busy.

But we cross paths every once in a while. I saw Vinnie (Vincent Kartheiser) a lot, because Alexis (Bledel, his wife) is on the show (“The Handmaid’s Tale”).

Was the red dress and white bonnet costume the easiest one for you in your career? It’s pretty great, actually (laughs), being able to go, what am I wearing today? Oh, probably the red dress. I knew I was going to be wearing it so much. Then, it had to be a dress that a hundred other women could wear, look and feel good in.

The most important criteria were—it has to be very comfortable. As much as these women are in prison, we wanted it to be a dress that you might be able to throw on some flip-flops and a cross body bag and wear around the city. I loved it. In fact, when I did the flashbacks as June, I missed the red dress. I was always happy to put the red dress back on.

The bonnet’s easy, because you don’t have to do your hair. So, less time in hair and makeup for me is always a good thing (laughs).