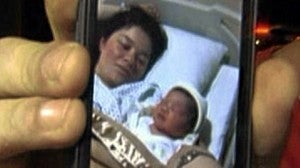 “I’m so proud of my granddaughter. I want to share her with everyone,” said actress and first-time lola Jaclyn Jose of daughter Andi Eigenmann’s firstborn.

Andi delivered Adrianna Gabrielle, who weighs 7.8 lbs., on November 23 via Caesarean section at the St. Luke’s Medical Center in Taguig City. The young actress is scheduled for discharge this weekend.

“The feeling when I saw Gabrielle for the first time was indescribable. She is so pretty, so mestiza,” Jaclyn told Inquirer Entertainment. Gabrielle is the name of Andi’s character in ABS-CBN’s defunct series “Minsan Lang Kita Iibigin.”

“She’s so pink, just like Andi when she was born,” added Gabrielle’s granddad, actor Mark Gil. “I’m sure this baby will become spoiled. After all, she’s my first girl apo.”

Andi’s parents weren’t around when she gave birth. Both were in Calatagan, Batangas, working on the set of TV5’s drama series “Valiente.” Jaclyn’s sister, Veronica Asistio, accompanied Andi to the hospital.

MARK Gil: “I’m sure this baby will become spoiled.”

“Andi wasn’t expected to give birth that day, but in the last days of November,” revealed Mark. “I was surprised when I got a text message from her saying her water bag already broke.”

Andi’s doctor told her to prepare for the baby’s arrival between Nov. 22 and 27, Jaclyn added. “The day before, there wasn’t any sign that she would eventually give birth. I wish I was with her in every step.” Nevertheless, Jaclyn said she had it all planned.

“The driver and maids were all given instructions beforehand. Andi’s and the baby’s bags were already packed. Everything was set. I really made sure Andi’s trip to the hospital would be smooth. Things went well even when I wasn’t around.”

Jaclyn said it was good that “Valiente” director Joel Lamangan allowed her to leave work early. “I would still have gone to work that day even when I knew Andi would give birth. I had to honor my commitment, but I was so agitated on the set.” 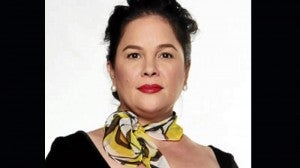 JACLYN Jose: “I’m so proud of my granddaughter. I want to share her with everyone.”

Andi was relaxed during the delivery, Mark reported. “She would send me text messages from time to time. I was surprised that she still had the energy to tinker with her phone. I bet she was also online then.”

Mark said he had mixed feelings upon seeing the baby for the first time. “She’s beautiful, like an angel. I have two grandsons with my daughter Maxene, but I know this girl will be different. I have to watch out for everybody to make sure they don’t spoil her rotten.”

Jaclyn said her major concern now was for Andi to heal fast. “I told her to rest. I want to make sure that the wound caused by the operation heals properly. I also want her to be able to breast-feed comfortably.”

Mark has this message to Andi, whom he calls “my princess”: “I know she will be a good mom. She’s a very strong woman. She must know that she will always be supported by her family no matter what.”

In a report on www.abs-cbn.com, Jaclyn said her family would refuse DNA testing on Andi’s child.

She made the statement after the family of actor Albie Casiño, whom Andi identified as the father of her newborn, said they would welcome a DNA test to confirm Andi’s paternity claim.

Jaclyn also said they would never ask for financial support from the Casiños and that the baby would never use the actor’s surname.