‘Guardians 2’: ‘Not as funny’ but eyeing box office jackpot 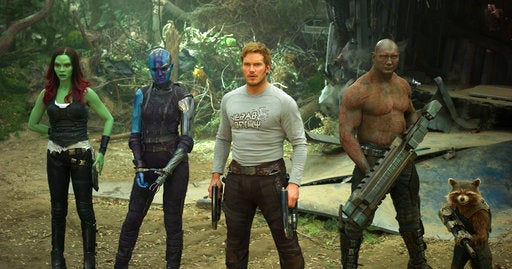 This image released by Disney-Marvel shows Zoe Saldana, from left, Karen Gillan, Chris Pratt, Dave Bautista and Rocket, voiced by Bradley Cooper, in a scene from, “Guardians Of The Galaxy Vol. 2.” (Disney-Marvel via AP)

LOS ANGELES—Three years ago, “Guardians of the Galaxy” arrived as a breath of fresh air, a smart corrective to the self-important pomposity of many superhero movies, and proved a box office smash.

Before the world had heard of “Deadpool,” James Gunn’s ironic, wisecracking contribution to the Marvel universe became the surprise critical and commercial hit of the summer of 2014, taking in $770 million.

Now his long-awaited encore, “Guardians of the Galaxy Vol. 2,” continues the screwball adventures of the first film’s spacefaring misfits as the jolly, B-movie vibe carries them to the outer reaches of the cosmos.

The story picks up with the squabbling Guardians fighting to keep their surrogate family together as Peter Quill (Chris Pratt) has daddy issues with a swaggering demigod who happens to be a living planet known as Ego (Kurt Russell).

“Star Wars” fans are unlikely to be struck by the originality of a father-son space opera, but there is plenty more family drama as Gamora (Zoe Saldana) faces down her malevolent cyborg sister Nebula (Karen Gillian).

“Guardians 2” is expected to enjoy one of the biggest opening weekends ever with critics agreed that its sharp one-liners make it — like its predecessor — a cut above the average superhero fare.

“We’ve been sitting around a $160 million domestic opening for a few months and I’m pretty confident in that so far.”

Still, the film has an underwhelming average score of 66 on MetaCritic.com, 10 points fewer than the original, a sign many critics were rather less charmed the second time around.

The Hollywood Reporter’s Todd McCarthy likened the sequel to “a second ride on a roller coaster that was a real kick the first time around but feels very been-there/done-that now.”

The cast gathered for a news conference in Beverly Hills, California, last week, when Gunn acknowledged that many sequels end up as simple rehashes but said he had tried to let his characters grow into new people.

Asked if he had read the comic before filming, Stallone, 70, replied that he “wanted to go in there with a clean slate,” while Russell, 66, revealed he hadn’t even seen the first film when he was approached about the sequel.

The “Escape from New York” and “Big Trouble in Little China” star surprised many by revealing he’s “not much of a movie-goer.”

“I knew that everybody loved it, though,” he said. “And when I saw the movie, I immediately started getting it, and I immediately wanted to do it.”

In a twist on a familiar theme, the cast members were asked whether they were worried about men being objectified, given the movie’s prolonged shots of the naked torsos of Pratt, Bautista and Michael Rooker, who plays the interplanetary marauder Yondu.

“I can say objectively that objectification is good for me because when I turned my body into an object that people like, I got paid a lot of money,” joked the 37-year-old Pratt, who went to great lengths to build an action hero’s physique.

READ: Chris Pratt slays as Star-Lord in “Guardians of the Galaxy Vol. 2”

“And now my grandkids are gonna go to a great college because of the object, you know.”

However, he quickly added that the serious and “pretty horrifying past” of objectifying women in Hollywood made it an altogether more serious issue.

The Guardians will next be inserted into Marvel’s wider superhero narrative with an appearance in “Avengers: Infinity War,” while Gunn revealed on Facebook last week that he would be back to write and direct the threequel.