The education of Lotlot 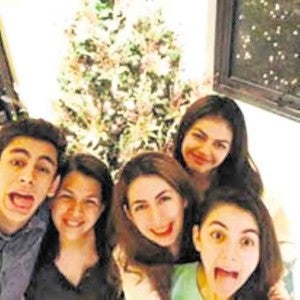 Lotlot de Leon (second from left) and her kids

The actress is busy both on the show biz and home fronts. Apart from taking care of her bustling household, she is also managing The South Grill restaurant in BF Parañaque with her boyfriend, Fred El Soury.

These days, tapings of the GMA 7 soap, “Destined to be Yours,” keep Lotlot preoccupied, along with the promo rounds for her indie film, Dexter Hemedez and Allan Ibañez’s “1st Sem,” which opens in cinemas on April 26.

She knows that having a theatrical run is a big gamble these days—more so, if your film is a small indie production that’s not supported by a major distributor. “I’m excited and nervous at the same time,” she told the Inquirer.

“It tells a beautiful story,” she pointed out. “I am sure lots of viewers will be able to relate to it. Plus, they’ll get to pick up many lessons, too.”

Lotlot herself was able to identify with her character, manic mom Precy, who is having a difficult time letting go of her firstborn (Darwin Yu), who’s going off to college.

“Like Precy, I’m also a single mom,” she explained. “Sometimes, she is no longer sure if she’s doing the right thing. She is torn between meddling and forcing her children to do what is correct or letting go and letting them learn their lessons on their own, even though it is painful for her to see them make mistakes with their choices in life.”

In her own family, Lotlot endeavors to strike a healthy balance between being her kids’ friend and being a stern mom. “I stand my ground as a parent when it’s necessary. I try to be as honest to them as possible—in a way that they can understand, though. When I need to be brutally frank, I can be, too.”

Janine and Jessica, two of her kids with actor Ramon Christopher Gutierrez, have already graduated from college. “Next year, my son Diego will graduate naman. Maxine, my youngest, is now in Grade 9.”

Lotlot feels strongly about education because she had to stop schooling when she got married as a teenager.

She admitted that she was pretty “hands-on” when it came to her kids’ schooling in their younger years. “With Diego and Maxine, they’re more independent now. But they know that I’m always here when they need me.”

She owned up that being a parent is a never-ending learning process for her, as well. “I still follow my gut feel when I need to make decisions. For example, when they ask permission to go out with friends … sometimes, it’s OK; sometimes, it’s not. It depends on the situation, really.”

She can be both strict and lenient, she insisted. “Kids need to realize that they should always tell the truth to their parents. Communication is important Listening to your kids is a must, too. Always make time for them. Even if you are a friend to your kids, they need to understand your role as a parent. Respect should always be there.”

Lotlot, the mom, was once a child, too.

She has a simple wish: She hopes her parents, acclaimed actors Nora Aunor and Christopher de Leon, will get to watch her first indie film, “1st Sem.”

“If there’s a chance, sana they can see it. It’s a simple movie with a lot of heart,” she remarked.

Her kids Jessica, Diego and Maxine have seen it, while Janine is raring to catch it soon. “They said my character is close to the real me. Akong-ako raw!”

She’s extremely proud of this little film, which has won awards in Hyderabad, India (including a special acting citation for Lotlot) and will be screened in Houston and Seoul in the coming weeks.

“My wish is that Filipinos would love our film the same way that foreigners did when they saw it abroad,” she quipped.