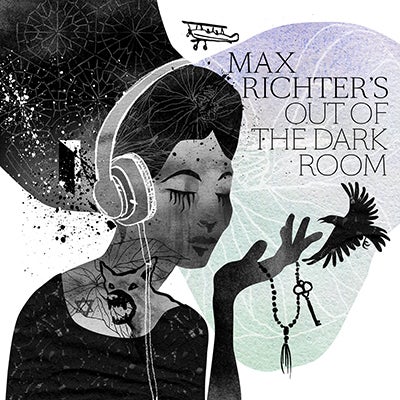 Cover: “Out of The Dark Room” by Max Richter. Image: courtesy of Milan via AFP Relaxnews

Max Richter, the prolific German-born British contemporary composer whose influences range from Bach to Brian Eno, will next month release a double-album from his career in film music.

Richter wrote the electronic-infused score to Ari Folman’s “Waltz with Bashir” and has worked on a range of other films from the breakthrough Saudi drama “Wadjda” to the documentary “Jiro Dreams of Sushi”.

His music for films—which also include Folman’s “The Congress”, Gilles Paquet-Brenner’s “Sarah’s Key” and Henry Alex Rubin’s “Disconnect”—will appear on the album “Out of the Dark Room” set for release May 19.

The composer described music as “my natural language.”

“It is what happens when I wake up in the morning. There’s stuff playing in my head,” he told AFP. “It has always been like that, and actually I think I feel very privileged to be in a position where I can do this.”

Richter was speaking on a visit to Paris to promote the third season of the HBO series “The Leftovers” for which he also wrote the score.

The composer said he was drawn by the “absolutely fantastic” script of Damon Lindelof, who based the series on Tom Perrotta’s novel about the mass disappearance of a large segment of the human population and the resulting effects on religion.

He said that the show asked the “big questions” that have always interested him—”Why do we do stuff? Why we get through the day? What it all means?”

The worlds of Virginia Woolf

Richter said he saw a parallel to his latest album “Three Worlds” which was inspired by three novels of Virginia Woolf—”Mrs Dalloway”, “Orlando” and “The Waves”.

The album, composed in tandem with a ballet, touches on the novels but it is also about Woolf herself, who struggled with mental illness before committing suicide in 1941.

“Her project is all about using creativity to go from point A to point B in your life. That’s what is impressive about her, really,” he said. “She lived a very challenging life psychologically. She had a very hard time, very difficult childhood. But in spite of that we have this incredible body of work.”

Richter has also finished the soundtrack to a period Western called “Hostiles”, starring Christian Bale and directed by Scott Cooper, which he said would come out by the end of the year.

Richter said he was influenced by a generation of musicians who dared to mix genres and who “opened up a space which wasn’t really there before.” Among them are two collaborators of David Bowie, English ambient artist Brian Eno and Ryuichi Sakamoto, the Japanese synthesizer innovator who brought in African rhythms, as well as minimalist composers Michael Nyman and Philip Glass.

But Bach reigns supreme in the personal pantheon of Richter, who listens to the 18th-century master every day.

“It all started with Bach, really. Bach did more than compose, he wrote a language. That’s another thing completely,” Richter said.

His other touchstone is Henry Purcell, “the English Bach”, whom he credits with “amazing techniques and lots of feelings.”

Richter said he is also working on an orchestral album with the tentative title “Voices”. He revealed, “I’ve been working on it for approximately 10 years. I need it to be finished.” JB