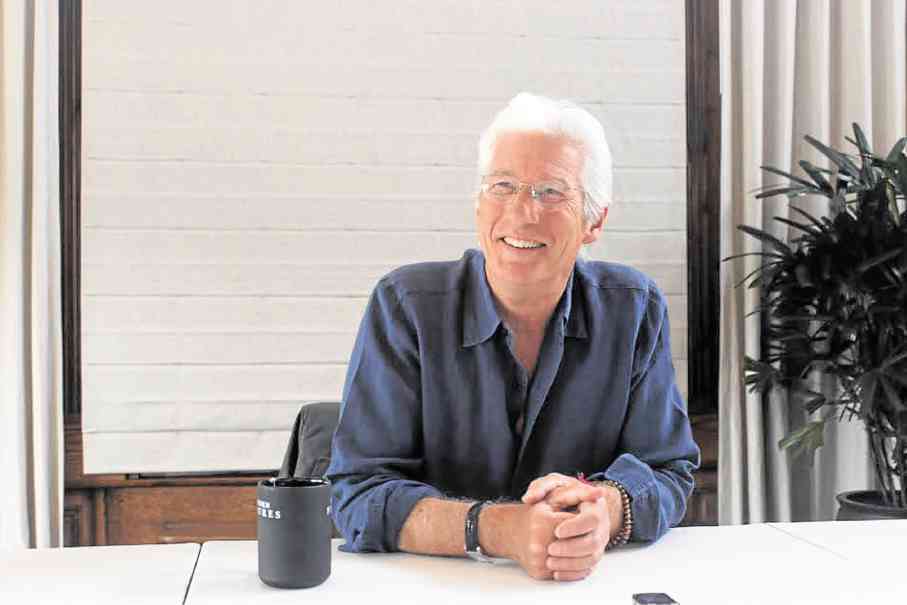 LOS ANGELES—The “American Gigolo” is now 67 and silver-haired and is seemingly fine with it.

“Why does my hair get whiter and yours gets darker?” he joked, flashing his winning Richard Gere smile.

The actor put his jacket behind his chair as he settled down for this recent talk in West Hollywood. One of the best-dressed gents in Hollywood, he opted for a casual look this morning: blue linen shirt with rolled up sleeves and jeans.

“Norman” is a drama that’s the latest addition to the filmography of Richard, who prefers indie fare over big-budgeted commercial movies. He plays the title role—someone we’ve all encountered—a man who likes to make many professional contacts and somehow find ways to involve these disparate individuals in “business deals.”

Well, this aging Manhattanite “fixer” meets a guy on a sidewalk who turns out to be an Israeli diplomat. With his gift of small talk, charm and persuasion, Norman ends up buying an expensive pair of shoes for Eshel (Lior Ashkenazi). Three years later, Eshel becomes the prime minister of Israel.

Suddenly, Norman connects with someone who has real power. What follows next forms the crux of writer-director Joseph Cedar’s film, shot in the United States and Israel, which taps the thespic skills of Richard, who’s getting even better with age. Screened in the Toronto International Film Festival, “Norman” also stars Michael Sheen, Dan Stevens (Beast in “Beauty and the Beast”), Charlotte Gainsbourg and Steve Buscemi.

Richard’s acting career continues at a steady pace—he has another film, Oren Moverman’s “The Dinner,” coming up and will shoot next Jon Avnet’s “Three Christs.” The latter’s premise is intriguing—Richard plays a doctor treating three paranoid schizophrenics, each of whom believes he was Jesus Christ.

The Buddhist actor is still active with his humanitarian and activist causes and is involved with his The Gere Foundation, the Tibet House, which he cofounded, and the International Campaign for Tibet (for its independence).

He’s divorced from actress Carey Lowell, with whom he has a son, Homer, 17. Since 2015, the Pennsylvania native has been dating Spanish socialite, Alejandra Silva.

How do you stay grounded after all these years? My dad is going to be 95 in a few weeks. He grew up on a farm milking cows. With someone like that as your father, you’ll be pretty grounded (laughs).

What are the advantages of having a much younger girlfriend? She’s younger than me (smiles)?

She’s 32? No, she’s much older than that—she’s 35. You fall in love or you don’t. That’s basically it. I don’t think it has anything to do with age. Whether she’s young or old, I like freshness, energy, openness. And she’s a very open, continually learning person. She isn’t afraid to look at herself in the mirror and be critical.

She’s very loving. She has all these fine qualities.

In “Norman,” you play the title character, who likes to meet people and make connections for them. Among the people you’ve met, who was the one that you wanted to impress? My dad—and my mom. My dad isn’t impressed by the movie star. He is impressed by the man. So, that’s all I ever wanted from them.

Certainly, the Dalai Lama is one of my major teachers. I’ve had a lot of teachers. I’d want them to be proud of how I conduct myself, what I stand for, and what parts of me might be helpful in the world. 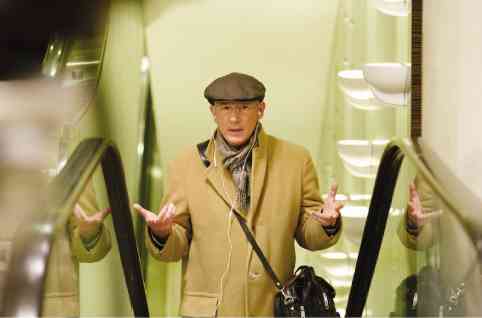 Your character Norman insists on buying expensive shoes for a stranger who becomes the Prime Minister of Israel. What’s the most expensive thing you have purchased? It was probably a guitar. At one point, I had a collection of about 150 guitars. I used to spend time with all of these guitars. I don’t have that time anymore. So, I sold over 100 of them and gave the money to my foundation for my causes. I have to watch myself when it comes to guitars.

How much would you spend for a pair of shoes? You want to know the truth? I get them for free (laughs).

What do you consider are the high and low points of your career? My career is a never-ending cycle. That’s why I am amazed I’m still here doing this. My choices have never been to be in the most [commercially] successful movie, or to make the most money. It’s always been about something that has interested me with people who I think I have a creative connection with. That’s always been very important to me.

I can’t work with people I don’t like, or those who are on a different wavelength with me. I just shut down. It doesn’t work. On one level, my choices are intuitive. On the other hand, they’re extremely rational. I can pull apart the decision-making very clearly and tell you on any movie why I did it, in detail, and what the expectations were.

Now, it doesn’t mean that it always works out. But it’s always highly motivated and clearly meant to be a creative experience for all of us who make it and, if we do it right, for the people who come to see it.

What are the pros and cons of fame? A million things, but I will never admit them here (laughs). There’s nothing positive about fame. There are positive things about being successful. I consider those two different things. I have no interest in the fame part. There are people who are famous, and you don’t know what they do. That’s just pure fame, and it’s like sugar. It doesn’t mean anything; it’s a rush.

But success leads to successes, which lead to confidence. It leads to learning. I’ve been incredibly fortunate. I never take success for granted, ever. The fact that I’m still here and doing things that I want, that I can send my kid to college and not have to worry about where the money is coming from—these are big things.

If I need an operation or a member of my family does, I could pay for that operation. That’s rare. Most people in the world can’t do that. So, to me, that part of being successful is something precious. That’s why you sense that I tend to spread this around as much as I can. Success isn’t something to hoard. You don’t build walls and put East German razor wire around it to hold it in. It’s meant to go out into the world.

And the pros and cons of getting older? The pros are that if your mind is still together, and you don’t have any serious illnesses, you keep learning and getting an accumulation of wisdom. That’s all good. Obviously, you can’t run as far as you did before and other things aren’t quite as successful as they were before (laughs).

When you look back at your life, what would you like to have done differently? I have a life way beyond what I ever could have dreamed. If, in that moment, it looked like I had made the wrong decision, the decision that I made took me someplace else. Something else positive happened.

I have regrets when I’ve said or done things that have hurt people. I wish I had not done that. Even in my imagination, I say “I’m sorry” to people even from 60 years ago. And if it comes up in my mind, I’m really, deeply sorry. But beyond that, I wouldn’t have done anything differently.