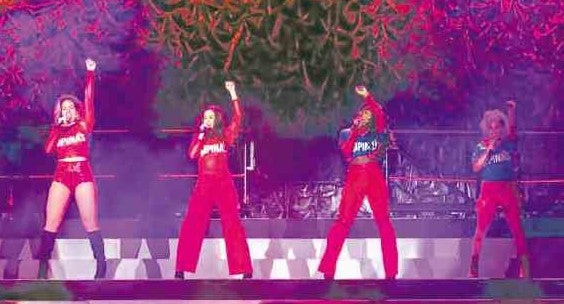 Fifth Harmony performed 18 songs that were culled from the group’s two studio albums. —PHOTOS BY JASPER LUCENA FOR MMI LIVE

By the time the American pop girl group Fifth Harmony finally arrived in Manila earlier this month, it was no longer a quintet, but a quartet.

But while some people felt that Camila Cabello’s departure from Fifth Harmony last December would end up being detrimental to the band, its remaining members, Ally Brooke, Normani Kordei, Dinah Jane and Lauren Jauregui, proved that they were more than capable of dishing out the same sprightly performances.

If anything, the girls actually sounded a tad more vocally cohesive without Camila’s distinctive tone that is perhaps better suited to solo recordings.

Although the SM Mall of Asia Arena wasn’t filled to capacity, the decibels unleashed by the eager crowd—composed mostly of teenage girls—would have easily made one think otherwise. And the screaming only grew louder when Ally, Dinah, Lauren and Normani took the stage wearing tops with the word “Pilipinas.”

The show’s setlist—most of whose 18 songs were culled from the group’s two studio albums, “Reflection” and “7/27”—was surprisingly well-rounded, with punchy pop-rock tunes like “Miss Moving On” and hip-hop-garnished bops with semi-rapped choruses like “Reflection.”

There were snazzy, electro-pop numbers (“I Lied” and “This Is How We Roll”), as well as pop-funk songs that wouldn’t have been out of place in the 1990s (“Not That Kind of Girl”). 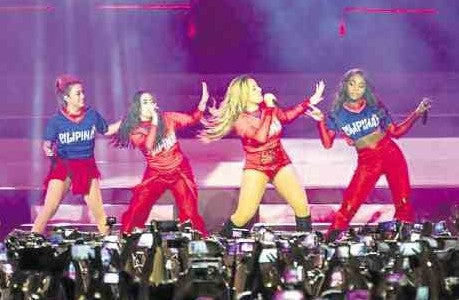 The girls, from left: Ally, Dinah, Lauren and Normani perform at SM Mall of Asia Arena

They worked the entirety of the stage with spunk and sass. The choreography was energetic—with a lot of hip-shaking, saucy posing, hair flipping and finger wagging—but it also wasn’t overly stringent, giving the girls just enough wiggle room to improvise and inject their own styles and personalities.

Meanwhile, it was in the night’s more subdued, midtempo numbers like “No Way,” “We Know” and “Write on Me,” in which the girls showed off their vocal mettle, with Ally and Dinah emerging as the most proficient; the go-to persons for the more challenging passages or higher belts.

To end the show—mounted by MMI Live—Fifth Harmony threw in succession their two biggest hits: “Worth It” and “Work from Home,” much to the delight of the young Filipino “Harmonizers,” whom Normani described as “like, the best crowd we have seen.”